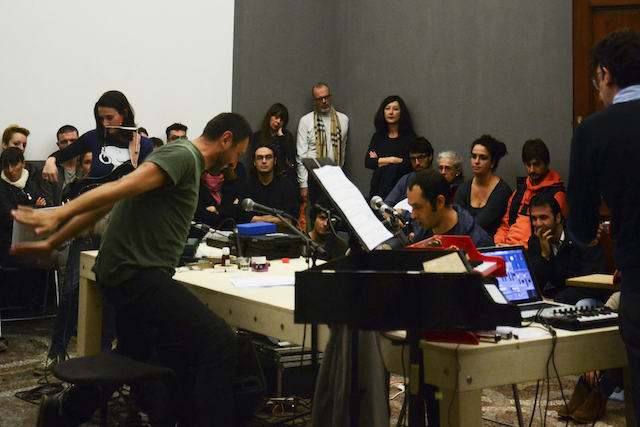 
Kinkaleri|All! is a project that is open to possibilities and opportunities. Kinkaleri brings about spirals of freedom and work on various planes, and is receptive to every condition of execution; what counts are the outgrowths that create the possibility of escaping from control on every side. Kinkaleri is beginning a collaboration in this Pocket Opera with the composers Filippo Perocco and Federico Costanza, contributing bodies and words in addition to a smoky crackle of pistols.

Kinkaleri was founded in 1995 as a group of formats and means in balance in the attempt. Its members come together with the aim of realizing specific projects, stimulating the desire to work on and around concrete ideas and dealing with all the aspects required for the creation of its activities. Kinkaleri operates in various areas – theatrical experimentation, movement, visual installations, sound materials and performance – searching for a language not on the basis of a style but directly in the concrete evidence of an object. The group’s works have been hosted in many programmes of events in Italy and abroad. In 2002 the company received the PREMIO LO STRANIERO, Scomesse per il futuro, and the PREMIO UBU (Best Dance Theatre Show) for OTTO. Kinkaleri is based in Prato in the Spazio-K, one of the spaces in the former Campolmi industrial area in the historic centre of Prato. The group currently consists of Massimo Conti, Marco Mazzoni and Gina Monaco.

Federico Costanza is a composer and musician. He took a diploma in piano, composition and electronic music (under the supervision of A. Vidolin) in Venice. He has attended courses and master classes with S. Sciarrino, B. Furrer, P. Billone, M. Levinas, T. Murail, G. Manzoni, A. Di Scipio, A. Richard, etc.
His works have been performed in Italy and abroad, at the 29th Cantiere Internazionale d’Arte di Montepulciano, ASTRA (Melbourne, Australia), Groggia Modern (Venice), the 52nd Venice Music Biennale, the World Venice Forum 2009, the BEAMS (Boston, USA), Atlante Sonoro (Rome), the Festival MiXXer (Ferrara), the 62nd and 63rd Estate Fiesolana (Fiesole 2009 and 2010), Music Village 2011 (Aghios Lavrendios, GR), Radio UNAM in Mexico City (Mexico), the Teatro La Fenice (Venice), the Teatro G. Verdi (Pordenone), etc. He composes for the theatre (Goldoni_Variazioni and Strana Dido [da Virgilio] by S. Tomassini) and for dance. He is co-founder of Meccanica Azione Sonora, an experimental electronic and acoustic music group, with which he has performed at the XVIII Colloquio di Informatica Musicale in Turin (also giving lectures and demonstrations at the University of Turin), at the 54th Venice Music Biennale, and so on. Costanza has always been interested in the toy piano, and in 2012 he embarked on a new project with the musician Lucia D’ Errico, forming a duo to create and execute new compositions for the unusual combination of amplified toy pianos and bass guitar. His works have been published and recorded by ArsPublica and Report #00. He is currently doing a period of training at the ZKM | Zentrum für Kunst und Medientechnologie, Institut für Musik und Akustik in Karlsruhe, Germany.

Lucia D’Errico has made communication and the fostering of communication the centre of her work, which has led to her expressing herself as a multi-instrumentalist, linguist, teacher and designer. She studied classical guitar, harmony and counterpoint, English, German and French language and literature, and furthered her studies of the bass guitar and the oud (Arab lute). Her interest in the music of southern Italy – in particular that associated with tarantism – and of the Mediterranean basin prompted her to explore the possibilities of the frame drum.Another strong area of interest is Bulgarian music, and D’Errico has also studied the language and culture of the country. She works with the FramEnsemble Mogliano Veneto (TV), Orchestra La Fenice Venezia, Laboratorio Novamusica Venezia, Flame Ensemble Firenze, Orchestra J. Futura Trento. She has performed in contemporary music concerts in Argentina (Festival Desde el Este al Oste, Rosario; Universidad del Litoral, Santa Fe; the 5th Ciclo de Musica Contemporanea, Buenos Aires), Finland (Brinkhallin Summer Festival, Turku) and Italy (Festival Rebus, Teatro dal Verme, Milan; Festival Nuovi Spazi Musicali, Rome; Atlante Sonoro, Rome; Festival Talea, Mogliano Veneto, TV; Auditorium of Maccagno, VA). Together with Federico Costanza, she has set up a project to explore the sonority of the bass guitar and the toy piano. Pursuing the possibility of bringing top-quality music to unusual contexts led to the establishment of the Militants of Brema project, the motto of which is "all music is music for all". Last but not least, she has a profound love of the cinema and its resemblance to the language of music.