8.30 pm
Screening in presence of the Filmmaker 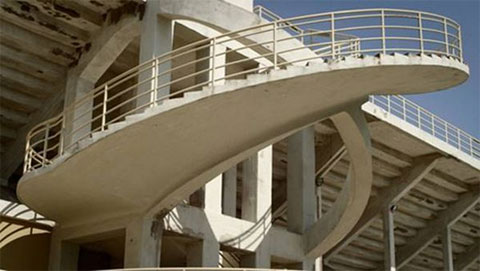 "PARABETON starts with the first still existing dome structure in Baiae near Naples, built in the first centry B.C. It is followed by a chronological array of seventeen preserved buildings by the Italian building engineer Pier Luigi Nervi (1891-1979). Nervi is the Architect‘s Architect of the 20th century. The Nervi sequences are interrupted by cinematic studies of Ancient Roman concrete constructions from the first century B.C. The film hereby suggests a relationship between Nervi‘s bold constructions and the groundbreaking inventions of Ancient Rome 2000 years ago. This 100 minute long film is the first part of the multi-part DECAMPMENT OF MODERNISM project, which will conclude my ARCHITECUTRE AS AUTOBIOGRAPHY film series about the origins, future, fate, and rise and fall of architectural modernism. The second part of the project will present buildings by the French architect Auguste Perret in France and Algeria, shot in the Spring of 2011. Perrot masterfully refined concrete construction in his ensembles and designs and bestowed them with a classic aesthetic. PARABETON, with its referral of modernism‘s constructional core to the concrete constructions of Ancient Rome, constitutes the finale of my ARCHITECTURE AS AUTOBIOGRAPHY series."


Heinz Emigholz was born in 1948 near Bremen in Germany, Heinz Emigholz has worked since 1973 as a filmmaker, artist, writer and producer in Germany and the USA. In 1974 he started his encyclopaedic drawing series The Basis of Make-Up. In 1984 he started his film series Photography and beyond. He has held a professorship in Experimental Filmmaking at the Universität der Künste Berlin since 1993, and co-founded the Institute for Time-based Media and the Art and Media program, there.

Pier Luigi Nervi (1891-1979) earned his diploma in engineering in 1913 and always considered himself a civil engineer rather than an architect. For him, building construction was both an art and a science. Since the 1930‘s, he has designed and built extreme roof and dome constructions and concrete frames for large buildings. In 1932 he realised the Municipal Stadium in Florence.