Both the professional and mundane encounters this brought about between artists of different backgrounds from Germany and their colleagues from Morocco, Algeria, Egypt, Lebanon, Palestine and Albania, as well as the artistic audience in Italy, have facilitated a lively network of cooperative projects, insights and friendships.

A focus on the »South« can no longer limit itself to Italian beaches. The Mediterranean has long been used as a political distancing medium, thereby also causing the neglect of the mutual exchange of artistic praxis and conditions of production in the wider region. Even today, invitations to guest artists frequently grind to a halt as a result of the refusal to grant a visa for their stay in Florence.

The Villa Romana sees its location in Florence as a 360° platform that permits a reevaluation of the master narratives of the European modern age in a city like Florence from different decolonized perspectives and in new epistemological production forms.

Here you will find a selection of interviews and texts compiled in cooperation with guest artists and writers from the Mediterranean region.

The Dialectic of Art and Politics
in Youssef Abdelke's Work

The Bakhnoug, a book, woven

On Damascus: My Agitated and Restless City

Down the Nile, to the land of the Etruscans,
to the fantastic happiness

One part of you is catching fire*

We try to communicate with other people

My country is where my opinion is respected

Why do you take pictures?

Biography vs. history of art

Conflicts of a fictive future

We are wasting a lot of time 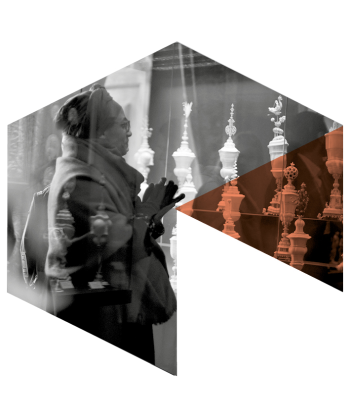