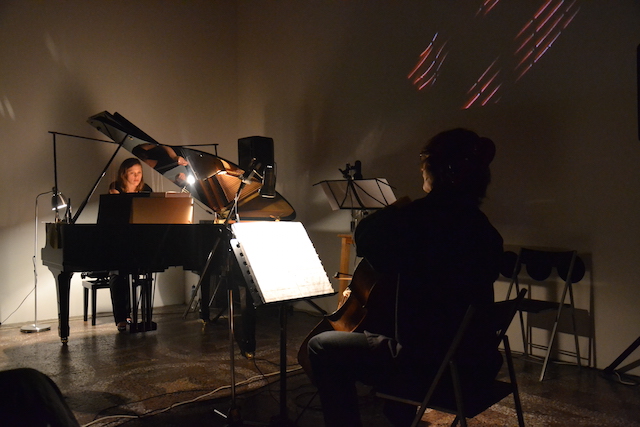 The concert comprises the music collective THÜRMCHEN, who will perform in Florence as a quartet with vocals, cello, glasses and piano. The group, which came about as a result of a meeting between the composers Carola Bauckholt and Caspar Johannes Walter signals the search for alternative musical possibilities. The trio will perform pieces from their repertoire, including In gewohnter Umgebung III (In Familiar Surroundings III) by the composer and performer Carola Bauckholt.


Carola Bauckholt was born in Krefeld, Germany in 1959. After working at the Theater am Marienplatz (TAM) Krefeld for several years, she studied composition at the Musikhochschule Köln with Mauricio Kagel (1978 - 1984). She founded the Thürmchen Verlag (music publisher) along with Caspar Johannes Walter in 1985, and six years later they founded the Thürmchen Ensemble. She has received numerous residencies and prizes such as the Bernd Alois Zimmermann Scholarship from the city of Cologne (1986), a residency at the Villa Massimo in Rome (1997), in 1998 she was designated the Artist of the Year by the State of North Rhine Westphalia, and she was selected to represented Germany at the World Music Days in Mexico City 1992, Copenhagen 1996, Seoul 1997 and in Zurich 2004. More recently she received the Star of the Week from the Munich Abendzeitung for her music theater work hellhörig at the 11th Munich Biennial in 2008, and she was awarded the German Composers Prize form the GEMA in the category experimental music in 2010. Her Musictheatrepiece hellhörig was performed with great resonance in München, Köln, Basel, Rheinsberg, Warsaw, Santiago de Chile and Buenos Aires. A central theme of Bauckholt's work is the examination of the phenomena of perception and understanding. Her compositions often blur the boundaries between visual arts, musical theater and concert music. She is especially fond of using noisy sounds, which are often made by unconventional means (such as extended instrumental techniques or transporting everyday objects in to the concert hall). Importantly these noises are not just part of some sort of predetermined compositional structure, but rather they are carefully studied and left free to unfold and develop at their own pace lending the compositions their own unique rhythm.

Pianist Helena Bugallo has appeared at international festivals including Tanglewoood, Ojai, Donaueschinger Musiktage, Warsaw Autumn, Musica Viva München, Wittener Tage für Neue Kammermusik, and Festival del Centro Histórico Mexico. She is a member of the Bugallo-Williams Piano Duo and the Ensemble Phoenix Basel, having also collaborated with the Meridian Arts Ensemble (New York), Ensemble Resonanz (Hamburg), Thürmchen Ensemble (Cologne), Ensemble Mondrian (Basel), and the SWR Vokalensemble Stuttgart, among others. She holds music degrees from the Conservatorio Provincial Gilardo Gilardi from La Plata (Argentina) and the State University of New York at Buffalo (USA), where she obtained a Master's degree in piano performance and a Ph. D. in musicology.

Truike van der Poel first studied classical philology in Leiden, then singing in Den Haag and choir conducting in Rotterdam, which she taught after her exams until 2001 in Hannover. Since then she concentrates on singing. Besides the baroque and classical oratorio she is especially engaged in the interpretation of contemporary music, and performed at Warsaw Autumn, Davos Festival, Musica Viva (Munich), at the Alte Oper in Frankfurt, at IRCAM in Paris and others. She was a permanent member of the Balthasar Neumann Choir (Thomas Hengelbrock) and the Schola Heidelberg (Walter Nussbaum) and worked as guest with the Ensemble L’itinéraire and the Ensemble Resonanz. She is the voice of the Thürmchen Ensemble in Cologne. Since 2007 Truike van der Poel is member of the Neue Vocalsolisten. She was soloist in world premières of vocal chamber music by Salvatore Sciarrino, Carola Bauckholt, René Leibowitz, Dora Cojocaru, Thomas Stiegler, Erik Oña, Caspar Johannes Walter and many others.

Caspar Johannes Walter was born in Frankfurt/Main in 1964. He studied composition with V. D. Kirchner (Wiesbaden) as well as with J. Fritsch and C. Barlow (Cologne Conservatory of Music, 1985-90). In 1985 he was cofounder of the Cologne-based Thürmchen Verlag (Publishing House). He has received several major composition awards including the first prize in the Stuttgart Composition Competition (1991), the 13th Irino Prize for Orchestra (Japan, 1992), in 1995 the first prize in the competition Vienna modern, the Hindemith Award of the Schleswig-Holstein Festival and from the state of North Rhine-Westphalia the award for most promising in the category music. In 1988, he was awarded the same by the City of Cologne. He received a scholarship in 1995/96 at the Künstlerhof Schreyahn (Artists' Colony), Lower Saxony, and in 1998 he has been granted a fellowship to carry out his work at the Villa Massimo in Rome. He has represented the young generation of Cologne musicians in exchange projects sponsored by the Goethe Institut in New York (1989) and Atlanta (1993). His pieces were selected for the World Music Days in Stockholm in 1994 and in Copenhagen in 1996. A CD with chamber music works by Caspar Johannes Walter released by the German Council of Music on the Label Wergo has been awarded the »Preis der deutschen Schallplattenkritik« in 1998. His interests as an interpreter - he is cellist in the Thürmchen Ensemble, which he also co-founded in 1991 - are focused primarily on young composers from the areas of experimental music and musical theatre. Caspar Johannes Walter's works are performed regularly, not only in Europe but also very successfully in the USA and Japan, for example 1993 World Premieres in Atlanta and Tokyo. In 2002/2003 Caspar Johannes Walter was teacher of composition and composer in Resindence at the University of Birmingham/UK. Since 2006he is professor for composition at the Musikhochschule Stuttgart.