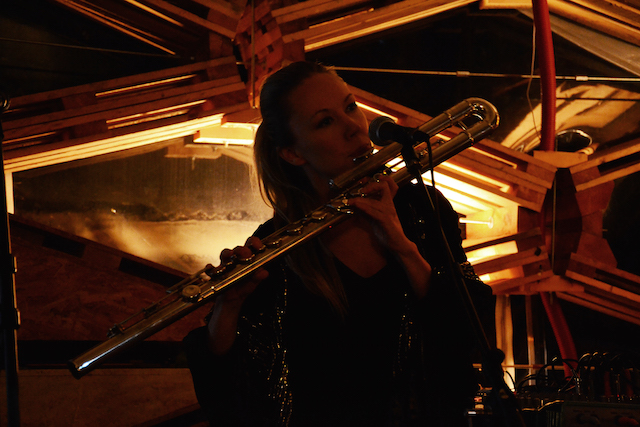 in the presence of the composer Peter Ablinger

FOCUS SWEDEN will centre on Sweden's innovative musical directions. In solo and duet performances, the Swedish soloists Joergen Pettersson (saxophone) and Ivo Nilsson (trombone and composition) will perform works by Swedish composers (Larsson and Nilsson), representatives of the avant-garde (Globokar and Scelsi) and a trombone solo by the Israeli composer Sivan Cohen Elias. The second part of the evening is formed by MIDAIRCONDO, a duo comprising the multi-instrumentalists Lisa Nordstroem and Lisen Rylander. Their music combines electronic and acoustic sounds that present an unusual mix of sophisticated pop and free improvisation (between jazz and contemporary avant-garde).r


Ivo Nilsson made his debute as a soloist with the Swedish Radio Symphony Orchestra in 1989,after studies at the Royal Academy of Music in Stockholm and at IRCAM in Paris. The same year he also made his debute as a composer with an octet premiered by ensemble lItineraire at Radio France.He is a member of the ensembles Axelsson & Nilsson-duo, Ensemble Son and KammarensembleN. As a soloist and with the above mentioned ensembles he has had performances at festivals like Beyond 440 Hz (Los Angeles), Chicago Jazz festival, Gaudeamus Music Days (Amsterdam), Huddersfield Contemporary Music festival, Inventionen (Berlin), Ilhom (Tashkent), Musica (Strasbourg), Roaring Hoofs (Mongolia), 2 Days and 2 Nights (Odessa),Sonorities (Belfast), Spazio Musica (Cagliari), Spectra (Tirana), Time of music (Viitasaari), Ultima (Oslo), Warsaw Autumn and the World Music Days (Hong Kong, Stockholm and Zagreb). His is a recording artist on the labels Alice, Caprice, dbp, Phono Suecia, SFZ & Wergo. Ivo Nilsson was the artistic director of the Stockholm New Music festival in 2003 & 2005. In 2007 Ivo Nilsson was awarded the Interpreters price from the Society of Swedish Composers.

Swedish musician, sound artist  and composer Lisa Nordstroem besides her solo work also a member of the electronic duo Midaircondo. Lisa is based in Svenska Grammofonstudion in Gorg and besides frequent tours around the world she composes music for exhibitions, dance, theatre, film and tv. Lisa is a one-woman-orchestra who is using all kinds of instruments, electronic equipment and sound sources to create her ethereal, intricate and layered sonic worlds. The live concerts are created with both improvisation and composed parts and are accompanied by Lisas films.

Jörgen Petterson, born in 1964, has developed into one of Sweden´s most prominent soloists. He studied at the Conservatoire National de Bordeaux in France, were he was awarded first price. When returning to Sweden he became the first saxophone student ever to be awarded a Postgraduate Diploma and an Award for Excellence at the Royal College of Music in Stockholm. Pettersson is a much sought-after soloist but he also engages in chamber music. He is a member of Stockholm Saxophone Quartet, Ensemble Son and KammarensembleN, which focuse on new music. The growing interest in the special qualities of the saxophone as an instrument, and also in contemporary music, owes a lot to his technical skill and artistic temperament. Numerous composers have written music dedicated to him. He has twice been awarded the Interpretor Price by Society of Swedish Composers.