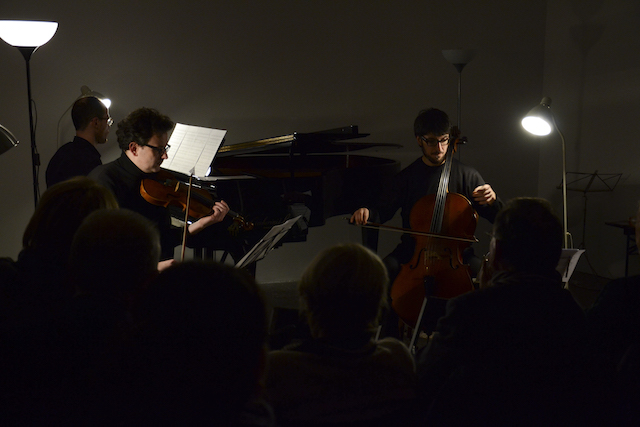 at the presence of the authors

The centre of the VANITAS encounter in 18 September is Salvatore Sciarrino's masterpiece in a new version developed especially for Villa Romana. It will be performed by the singer Valentina Coladonato, whose repertoire ranges from Monteverdi's baroque music to innovative and experimental music, Francesco Dillon and Emanuele Torquati. To finish, a piece by the award-winning composer Francesco Filidei and commissioned by the Villa Romana will be premièred.

Salvatore Sciarrino (1947)
Vanitas Still life in one act, for voice, cello and piano


Salvatore Sciarrino (Palermo, 1947), self-taught, began to compose at the age of twelve. After completing his studies in Classics, he attended university in his native city for several years. In 1969, the Sicilian composer moved to Rome, and in 1977, to Milan. Since 1983, he has been living in Città di Castello, Umbria. He has composed for Teatro alla Scala, RAI, Maggio Musicale Fiorentino, the Venice Biennale, Teatro La Fenice, Teatro Carlo Felice, Arena di Verona, Stuttgart Opera, La Monnaie in Brussels, Frankfurt Opera, Concertgebouw in Amsterdam, the London Symphony Orchestra, and Suntory Hall in Tokyo. He has composed for such festivals as Schwetzingen, Donaueschingen, Witten, Salzburg, New York, Wien Modern, Wiener Festwochen, Berliner Festspiele Musik Biennale, Holland Festival, Aldeburgh Festival, Festival d'Automne in Paris, and Ultima in Oslo. From 1969 to 2004, his works were published by Ricordi, and the following year RAI Trade acquired the sole rights. He has taught at the conservatories of Milan (1974-83), Perugia (1983-87) and Florence (1987-96). He has also taught courses and master classes, and in particular those in Città di Castello from 1979 to 2000. Between 1978 and 1980 he was Artistic Director at the Teatro Comunale in Bologna. Sciarrino has won numerous awards: Prince Pierre de Monaco (2003) and the prestigious Feltrinelli International Prize (2003), the new Musikpreis Salzburg (2006), and the Salzburg Land International Prize for Composition. In 2012, the BBVA Foundation awarded him the Prize for Frontiers of Knowledge 2011 for contemporary music. In 2006, his new work Da gelo a gelo (From Frost to Frost), co-produced by Schwetzinger Festival, Opéra National de Paris and the Grand Théâtre de Genève, was performed to acclaim. In 2008, the Salzburg Festival dedicated a festival season of 15 theatre pieces and concerts, which opened with a world premier performance of the 12 Madrigali (12 Madrigals). In May of 2011, the first performance of the theatre piece Superflumina was held at the National Theatre of Mannheim.

Francesco Filidei graduated from the Conservatory of Florence and the Conservatoire National Supérieur de Paris with the highest honours. He has been invited both as a composer and organist to prestigious places and festivals. Numerous monographic concerts have been scheduled in Japan, Italy, France, Germany and the United States. He has taught at the Abbey of Royaumont, at Iowa University, the Academy of Takefu, the University of Santander, was composer-in-residence at the Academy Schloss Solitude in Stuttgart and Casa Velazquez in Madrid. He has received such awards as the Musikpreis Salzburg Förderpreis 2006, Takefu International Prix 2007, and the Siemens Förderpreis 2008. Having been awarded the UNESCO Picasso Mirò Medal, he will be a guest at Villa Medici (as a current Prix de Rome bursary recipient) in 2012. His works are published by RAITRADE.

Emanuele Torquati is rapidly gaining international recognition for his poetic and passionate music making, communicative performances and engaging programming. His flourishing career has taken him to some of Europe’s most illustrious venues, and such diverse cities as San Francisco, Banff, New York, Chicago, Vancouver, Boston, Paris, Lyon, Leipzig, Berlin, Prague, Krakow, Munich, Graz, Milan and Rome. A notable performer of new music and an avid chamber musician, he enjoys a diverse and varied career as a pianist. In March 2008 he was artist in residence at The Banff Centre with the project Voyage Messiaen. In 2009 his debut at ILHMEC Chicago and his US Tour with cellist Francesco Dillon were highly praised from critics and followed by an immediate invitation from Columbia University in the City of New York for a solo recital. His performance was hailed as a "magnificent recital of a powerful player, who uses his full body to create sounds" and described as an "out of body experience" by the Columbia Spectator. Highlights of the 2010 season include a residency at The Banff Centre with the premiere of a his new Janacek project, and the San Francisco debut and the release of a double CD of Robert Schumann’s piano and vocal music transcribed for cello and piano.

Valentina Coladonato received her degree in Foreign Languages and Literatures at the G. D'Annunzio University in Pescara and holds a degree in Voice. She has won several international competitions, including the Valentino Bucchi Prize for modern and contemporary music (2004), the G. Di Stefano Prize, the Città di Alcamo Prize (as well as the Critic’s Jury Prize, 2006); the Toti Dal Monte Prize (together with the Audience Award), the Maria Caniglia Prize (along with the Audience Award, 2007). She made her debut in the opera L’Ormindo by Cavalli. Following that, she has sung leading roles in Mozart's Bastien und Bastienne, La Caduta de’ Decemviri by A. Scarlatti, Verdi's Falstaff, Così Fan Tutte by Mozart, I Puntigli delle Donne by Spontini, Demofoonte by Jommelli, Tito Manlio by Vivaldi, Norma by Bellini, Artemisia by Cavalli, and L’Incoronazione di Poppea by Monteverdi. She has performed with Teatro alla Scala, Opéra National de Paris, the Salzburg Festival, the Vienna Musikverein, the Concertgebouw in Amsterdam, De Singel in Antwerp, the Flanders Festival, the Saint Petersburg Philharmonic, the South Bank Festival in London, the Frick Collection in New York, the George Enescu Festival, the Ravenna Festival, the Pergolesi Spontini Festival, the RAI in Turin, MiTo, the Sala Sinopoli in Rome and with other European, American and Asian venues and musical institutions. She has worked with La Venexiana, the Byzantine Academy, La Stagione Armonica for baroque repertoire, Sentieri Selvaggi for contemporary music, Algorithm and Ensemble Confluenze. She has performed the world premieres of several compositions. Ivan Fedele has written a number of pieces for her which were performed in their world premieres with the Philharmonie Köln radio WDR, Teatro alla Scala, Teatro Dal Verme in Milan, and the Ponchielli in Cremona. She has worked with such directors as M. Scaparro, C. Graham, C. Lievi, F. Micheli, P. Pacini, A. Pizzech, M. Cappelletti. She has also worked under such conductors as R. Muti, D. Robertson, P. Eötvos, L. Shambadal, J. Axelrod, M. Tabachnik, P. Rundel, A. Pinzauti, M. Panni, C. Scimone, C. Desderi, O. Dantone, and C. Rovaris.

Aldo Campagnari received his degree in violin under the guidance of Pierantonio Cazzulani and Armando Burattin. He was first violin with the Italian Youth Orchestra, and has worked with the Orchestra of the Teatro alla Scala in Milan. During this time he was also pursuing higher studies and perfecting his art with Massimo Quarta in Bologna at the Higher Conservatory of Music in Lugano. He is a member of the Quartetto Prometeo, with whom he has won prizes in prestigious international competitions (first prizes in Prague, Bordeaux, Monaco ARD), collaborating with such artists as Mario Brunello, Alexander Lonquich, Veronika Hagen, Reiner Schmidt, Michele Campanella, Antony Pay, Enrico Pace, David Geringas, J.G. Queiras, and C.Widmann. He has recorded for RAI Radio 3, ARD (Munich and Saarbrueken), ORF (Austria), Czech Radio, and the BBC (Belfast). In September 2011 the recording of the Schumann string quartets was released for Amadeus magazine. In 2012, the complete string quartets by S. Sciarrino will be released for Kayros and those of H. Wolf for Brilliant. In 2006, he founded the Quartetto Prometeo Festival and from 2006 to 2009 was the director of ContemporaneaMente, the contemporary music festival in Lodi. His is the violinist with Alter Ego (Rome), teaches string quartet at the Higher Conservatory of Music in Lugano, and has taught courses at the Orlando Festival in Holland, the Pacific University of California and at the Conservatory of Trento. He currently teaches violin at the J.Novak School of Music.