Every year, a large number of international artists are invited to the Villa Romana in Florence. Villa Romana Fellows live in Florence for ten months, while invited guest artists either stay in the city for several months or spend a few days there for an exhibition. Over the years, many of them have also filmed in the city and the region. We will be showing a selection of these films in cooperation with the Fondazione Architetti (FAF) on 16 March at the Palazzina Reale, which was built by Giovanni Michelucci in 1935.

The first evening's seven films focus on various historical, political and social contexts and questions of artistic narration. However, the films also show that Florence and the IN SITU environment continue to be a place of international artistic production.
The second part of the program, OUT OF PLACE, concerns reflections of urban realities and architectural storage spaces around the world. New films by Loretta Fahrenholz and Clemens von Wedemeyer will be presented for the first time in Italy. These two artists, like Nico Joana Weber and Ei Arakawa, have lived and worked in Florence as Villa Romana Fellows. 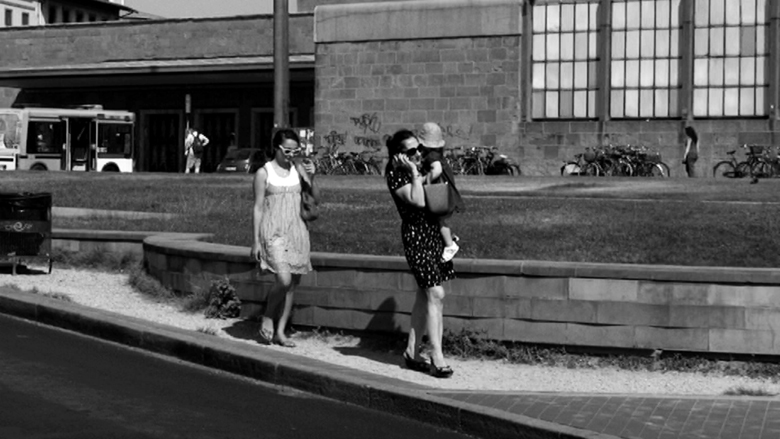 In La Corsa del Venditore (The Run of the Seller), Africans who immigrated to Italy, in this case to Florence, are never seen but talked about by an outsider. La Corsa del Venditore takes the form of a monologue spoken by an Italian woman talking on her cell phone, presumably to a friend, and describing a scene that she just witnessed. Well dressed, the woman is pacing in front of the Florence train station, flanked by what the viewer assumes are her daughter and granddaughter. She describes in detail a scene during which African street vendors harassed by the police, were forced to quickly fold up the blankets used to display their merchandise on the pavement and run away. To her surprise, the vendors settled down only a block.

Maya Schweizer and Clemens von Wedemeyer lived at the Villa Romana for a year in 2008. In 2016, she presented the film program Memories in Stone here together with Cecilia Canziani.

The short film The Misconception deals with the endless humiliations and repeated human rights abuses many refugee women endure simply for being born female. It was shot in a shelter for trafficking victims and its protagonist is an Eastern European woman, who migrated to Italy in search of work and ended up in forced prostitution. With unconcealed intimacy, she tells about herself and about her aspiration to an ordinary life, certainly a very modest request but completely unheard. The beauty of her hands and the elegance of their movements strongly contrasts with the tension in her voice and the depth of her reflections. The camera becomes an empowering tool of self-affirmation, against prejudices and misconceptions. The Misconception is the title of a book by Franco La Cecla, in which he states that "the distance which keeps us separate is also a deep common layer which keeps us close but which we will never understand."

Mario Rizzi put on the exhibition The Waiting at the Villa Romana together with his film Al Intithar in 2013.

Throughout , an assemblage of different in time voices of Italy takes place. The old genre of Tuscan Contrasto verbal duels, in which the performers-poets Emilio Meliano and Realdo Tonti use their arguing skills to debate the politics and morality of contemporary Italy, meets historical educational dialogues from the age of enlightened despotism, performed and commented by the young Italian actors Lavinia Parisi and Marco Rustioni.

Eleni Kamma lived as an international guest artist at the Villa Romana in 2010 and 2011 and went on put on the exhibition From Bank to Bank on a Gradual Slope here in 2012.

A story about a clerk holding power over a small concrete town. She makes every person who comes to her office fill in countless forms and then she sends them to an unused floor of a Brutalist office building. Although it is in darkness and nothing whatsoever can be expected to be dealt with there, the characters thoughtlessly do as they are told and wait in the dark corridor for hours. Nobody calls the clerk’s pointless orders into doubt. After work, the protagonist steals light bulbs from street lights which she then brings home and destroys to prevent them from shining again. By gradually annihilating light she tried to put limits on the people living in her town, at once trying to convince them that darkness is exactly what they need. "There’s freedom in darkness," she says.

Karolina Bregula lived and worked at the Villa Romana in 2015 and 2016 as winner of the View Prize for Young Polish Art.

The film The Tallest is a shot on-site collection of the tallest buildings in the world today. The high-rises are shown as set pieces of global capitalism, visually diminishing into abstraction. The reduced images are reminding of 3D rendering. The simulated image of these buildings circulates in the media for representational and advertising purposes, becomes a substantial object and the actual spatiality becomes a mockup. The narration is undertaken by a computer voice, it describes the competition for the tallest tower at such divers places as Chicago, Dubai, Hong Kong, Kuala Lumpur, Mecca, Nanjing, New York City, Seoul, Shanghai, Shenzhen, Songdo and Taipei.

The film Upper depicts medieval towers of the Italian city, San Gimignano, dubbed the Medieval Manhattan. San Gimignano was an important trading center in the 13th and 14th centuries. The fortified towers in San Gimignano however, were not used for defense but rather as a way for the rich Tuscan families to boast their wealth and power in its height. The ultra-high definition images of the towers are shot with intense blue skies – detached from the site’s spatial structure. A dense, high frequency soundscape of non-local crickets narrates the towers of San Gimignano as the origin of today’s global high-rise architecture. In this respect, Upper serves as a historical echo to the film The Tallest.

Rebecca Ann Tess lived as a Villa Romana Fellow in Florence in 2011.

The Carrara mountains were being quarried when white marble was taken for the sculptures of Michelangelo. It is an extremely dissected and disassembled landscape focused entirely on the production of this commodity - and production means excavating the production site. (…) This is where Sophie Reinhold has set up her studio. It looks like an ancient theatre stage. On the wall is an image, a marble image created by excavation. She has simply cut a rectangular section from the mountain. (…) What at first glance seems like a final check on an image that is perhaps about to go public, is actually a goodbye. Its fate can be foreseen. This raises the question of whether an artistic and historical approach to dealing with the precious marble is possible and also questions the value of artistic production itself within a purely materialistic and self-deconstructive structure. Nora Schultz

Sophie Reinhold lived as a Villa Romana Fellow in Florence in 2012.

The films La Promenade Architecturale and Vendredi compare the current situation of two Le Corbusier villas near Paris. Both buildings stem from the same architectural period and used to be abandoned ruins. But whereas the Villa Savoye was declared a World Heritage Site, the Villa Lipchitz had been carefully restored to its original state by its current resident.
La Promenade Architecturale is set in the studio house built by Le Corbusier for the sculptor Jacques Lipchitz in 1925 and focuses on the intimate and lived-in quality that sets it apart from merely being an architectural icon. Slowly the house is discovered through the gentle cleaning routine that leads from the garden to the roof terrace and back; providing a filmic translation of Le Corbusier’s concept of the ‚promenade architecturale’: the discovery of architecture through movement in space.
The Villa Savoye, on the other hand, which marks the high and end point of Le Corbusier's purist period, has become a monumental icon. Vendredi shows a day in the building's life that is not inhabited like the Villa Lipchitz but nonetheless displays a daily routine: temporarily the villa is animated by visitors that move through its empty spaces like actors on a stage.

Nico Joana Weber was a Villa Romana Fellow in 2016.

Punky, streetwise Sanna bridles at her aunt’s traditional ways. Her adopted family are members of the Watchers, powerful information-obsessives whose unusual telepathic abilities and sociopolitical pretensions only manage to get on Sanna’s nerves. But after she abandons the family home and her young lover for the city, her dream of a brilliant urban life quickly falls flat. From her half-sister Algin , in despair over a faded singing career, to Algin’s love-obsessed partner Lisko, to Hedy, the splenetic, paranoid journalist who’s inadvertently caught Lisko’s eye, everyone in the big city seems to be totally wrapped up in their own serial dramas and star-crossed affairs. She quickly acquires a problem of her own when her lover, Franz, reappears in the city along with her unpredictable, sinister Watcher sisters. Sanna and her friends bounce from bar to bar towards a party that will bring everyone’s minor ennuis and compulsive intimacies together with unforgettable results. (Jeff Nagy)

Loretta Fahrenholz was a Villa Romana Fellow in 2014.

Helena and Miwako is the sci-fi road movie made by collaborators Ei Arakawa and Henning Bohl, featuring Arakawa’s mother, Miwako; his brother, Tomoo; and Bohl’s 10 year-old daughter, Helen. Over their three week tour of the historical playground structures of Japan, the film reveals the personal histories of a family unit unfolding, placed alongside questions of generational overlaps and parenthood.
The playgrounds of Japanese architect, Mitsuru Senda (born 1941 in Yokohoma, Japan), are ever-present: pragmatic models for behaviour and education, Senda’s playgrounds focus on designs of cyclicality, a focal point of children’s games. The group’s travels focus on the now infamous region of Fukushima, Arakawa’s home town and site of the 2011 earthquake and tsunami.

Ei Arakawa was a Villa Romana Fellow in 2014.

Clemens von Wedemeyer was a Villa Romana Fellow in 2008.