Saturday 2 September, 9.30 pm to Sunday 3 September, 7 am in the garden of the Villa Romana 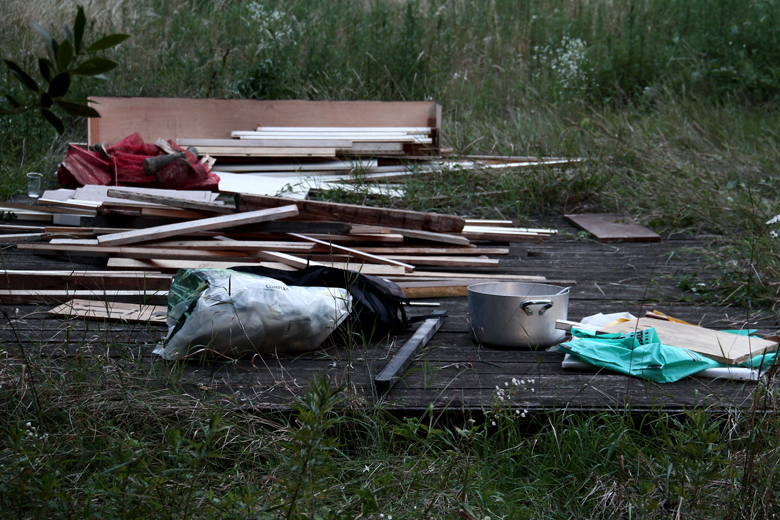 In the cities of Latin America during the second half of the tenth century, the self-administered invasion by the border areas, the occupation of the ground, occurred after sunset; this was the time that the improvised walls of straw matting and corrugated metal were erected. Then, the following morning – depending on the mood of whichever government was then in power – the police would strike to clear the area, which only led to another invasion, and again and again, until the occupiers were finally left in peace.

As part of the Open Studios, Gaetano Cunsolo will present his durational performance As night falls...I’ll start to build in the garden of the Villa Romana. In collaboration with a group of students, the artist will carry out a performance over nine hours long in which only the act of construction and its associated sound will provide the main element of the narrative.
Through radical treatment of tense, As night falls…I’ll start to build seeks to create a friction with reality by bringing the time of the performance in line with the time of the construction. The audience can drop by, take part, stay, fall asleep, take a look at any point and then inaugurate the completed construction the following morning with a hot drink.

Gaetano Cunsolo (1986) studied at the Academy of Fine Arts in Florence and completed an MA for visual arts and curatorial practice at the NABA in Milan. He currently teaches at the Strate School of Design in Paris and is preparing a solo exhibition at Primo Piano in Paris (curator: Theo Maria Coppola). Cunsolo has exhibited widely, including in the Parco d’Arte Vivente in Turin, in the Museo Pecci in Prato, in the Galleria d’Arte Moderna e Contemporanea in Rome and at the Milan Triennale.