Francesca Banchelli
Before the Name 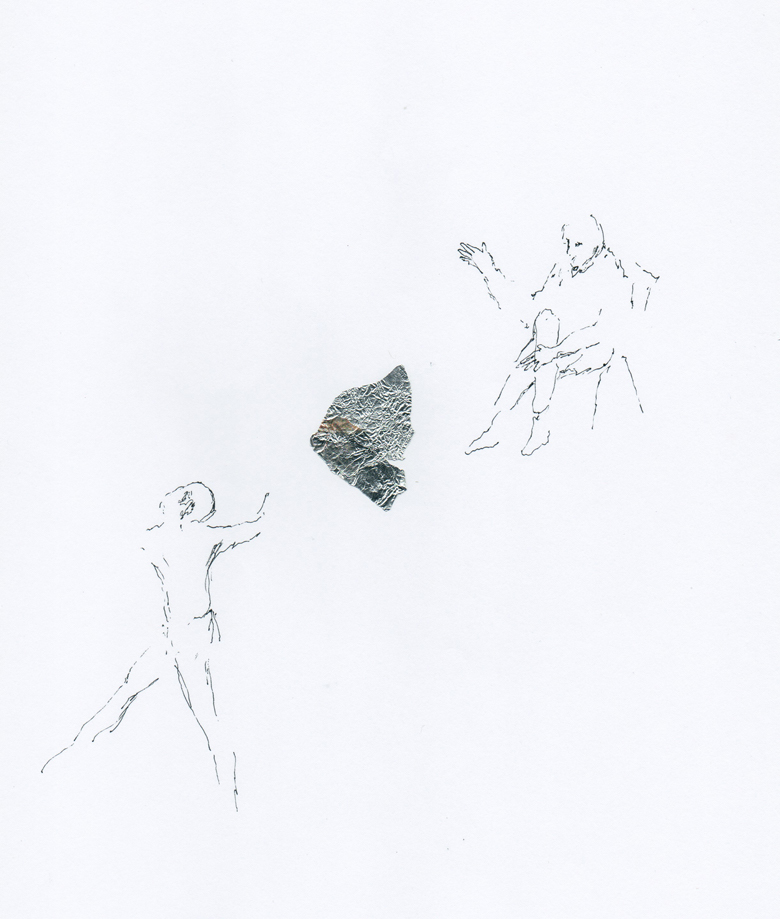 Francesca Banchelli, Before The Name, 2016, drawing

Before the Name, after the Mountain
Performance by Francesca Banchelli
with Pier Luigi Tazzi and Luna Cenere
Music by Emiliano Zelada


"Dance plays out the event before the event's nomination."
Alain Badiou

Before the name: a Book on an Itinerant Performance Project retraces the development of Before the Name, a performance by artist Francesca Banchelli, inspired by the text La Danse Comme Métaphore de la Pensée by the French philosopher Alain Badiou. The performance has been featured 2015 at the Wilkinson Gallery in London and at SpazioK, Prato, in 2016 at MACBA, Barcelona and at MANIFESTA 11 - Cabaret der Künstler, Zürich.
The book, edited by Carolina Ciuti, is a collection of the material produced before, during, and after the performance: drawings, photos, the written contributions of participants, stills, music, and a reprint of the text by Alain Badiou with the permission of Stanford University. Focusing on the concept of the event, the artist organized the various versions of Before the Name through a system of choreographic sequences, aiming to explore the temporal and spatial tensions between the actions of the two dancers of London's Michael Clark Company, critic Pier Luigi Tazzi, philosopher and performer Jonathan Lahey Dronsfield, and composer Emiliano Zelada, contrasted with extracts from Alain Badiou's lectures.

For the book presentation, the artist will propose the original, unreleased version of the performance, Before the Name, after the Mountain, in which the thinker and the dancer, occupying the space alone, creating a strong common expression, sparking a dialogue between body and intellect. This version of the work draws on the idea of dance as an essential and metamorphic movement, as well as experience and encounter with the art of life in all its aspects, closely related to the emergence and transformations of physical and mental states.

Before the Name: after the Mountain is a special, site-specific project created for the temporary pavilion at Villa Romana, and will feature the critic, curator, and thinker Pier Luigi Tazzi and Luna Cenere, an independent dancer who has worked with such choreographers as Simone Forti, accompanied by original music by Emiliano Zelada.

Luna Cenere is an Italian artist trained in dance. Born in Napoli, where she started her career as dancer and, after working with several companies, she continued her studies at SEAD Salzburg Experimental Academy of Dance (Austria). By the end of her studies she was selected as guest member of SEAD Bodhi Project taking part in the creations of Anton Lacky (Anton Lacky Company /Les Slovaks Collective) and Josef Frucek (Rootlessroot). In 2014 she worked with Simone Forti and Anton Lacky. In 2016 she became a member of Agitart Company (Spain) and Company Virgilio Sieni (Italy). Choreographer of the solo piece Kokoro, selected by Aerowawes Twenty18 and Network Anticorpi XL 2017, Twin (work in progress) selected by Network Anticorpi XL 2018, Natural Gravitation tribute to Isadora Duncan and Pneumatika. Besides her work as dancer and choreographer, Luna is also a certified teacher of contemporary dance by SEAD; she leads workshops in movement research and improvisation. Luna currently lives and works between Italy and Belgium.

Pier Luigi Tazzi was born in Colonnata, Firenze, Italy, in 1941. He lives in Capalle, Firenze, and in NongPrue, ChonBuri, Thailand. He is an art critic and curator, and has been president of the non-profit organization Fondazione Lanfranco Baldi, Pelago, since 1998, advisor at large of Adel Abdessemed, Paris, since 2011, curator at ATELIER MARCO BAGNOLI, Montelupo Fiorentino, since 2015, foundation member of Cantiere Toscana since 2016, curatorial advisor for Davide Rivalta since 2018.