The meeting starts at 6 pm and takes place in the garden, and in accordance with Covid-19 measures. 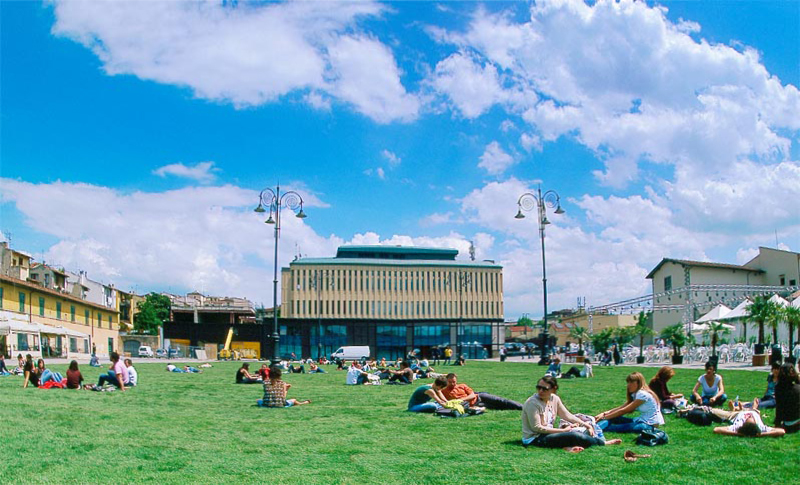 What is a public space, what makes it political? The theoretical-political debates over the years have defined the city and its spaces according to the categories of ownership, management, consumption. It is actually the bodies, the experiences, the struggles and the subjectivities that go through them that define public spaces, making them political, plural, contingent, conflictual and imbued with desire.

The notion of public space is entirely different for diverse groups. What happens when experiences deviant of a norm are used to evaluate urban space? Does the city expand or shrink? For whom can it be frightening to walk down the street alone? How can public and collective spaces in a heterogenic society be designed in such a way that they are places that women, marginalized and discriminated groups can equally use?

Zaganelli presents his practice on the borderline between art and space, illustrating some of his most emblematic works about an idea of community, conviviality and sharing, such as Non A Tutti Piace L'Erba, La Mappa dell'Abbandono, La Grande Griglia and others.

For some years now, in Belmonte Calabro, a group of young architects and researchers have been exploring the boundary between practice and education. Through research, planning, design pedagogy and training, Le Seppie aim at a revolution: improving the cultural fabric of the community, promoting social integration and development of the territory.

The city of today between self-managed realities and solidarity practices - the case of Florence.

Za'atari was founded in 2012 as a refugee camp for Syrian refugees in North Jordan. Margherita Moscardini has been working there for some time, witnessing the transformation of the camp into a real city, the fourth largest in Jordan. What right to citizenship can its inhabitants claim? Can we imagine a global paradigm shift starting from the very space of the paradox represented by the refugee camps?

Following three months of quarantine, isolation and introspection, we entered the urban space with new expectations. The historicised centres and tourist attractions of Italian cities are frozen in an asynchronous moment: after having made the conversions to meet the demands of mass tourism, they are seeking new intended uses; in the meantime, the inhabitants are rediscovering the option of civil coexistence and the desire to spend time together – an urgent desire after the lockdown – which goes hand in hand with the demand for public spaces. There are numerous inhabitants and numerous diversities: of gender, age, origin, interests, needs, possibilities and desires.

Even if it was only for a few weeks during isolation, we saw solidarity in action, through solidarity purchases, for example. In May and June, for the first time in perhaps half a century, children played in Piazza Santa Croce in Florence. Before this new rhetoric of the rediscovered city only profits an exclusive few, before citizens and residents become the plan B of a city devoted to tourism and not the first target of urban policies, we should ask ourselves how we want to experience and keep the common space and cultural ecosystem alive now and in the future.

Is public space everyone's right? Who is talking about it and where? How can children, young and old people, families, friends and guests, relatives and strangers experience it? Are there spaces designed for and by women? Is it possible to conceive the city as a heterotopic place of intersectionality? As a space for a new mutualism and solidarity? Is it possible that the city is not merely an archipelago of private places of consumption? Is it possible to rethink a city like Florence in terms of an active, anti-racist citizenry and coexistence in solidarity?

And moreover, what can we learn from other models of governance and self-organization spaces? What can refugee camps teach us about how to rethink the cities of the future? And whether we rethink the space in a relational and performative way? Un locale assoluto, an absolute venue - as the philosopher Adriana Cavarero defines it – one that extends into the intermediate, dialogical and mobile space of those who inhabit it?