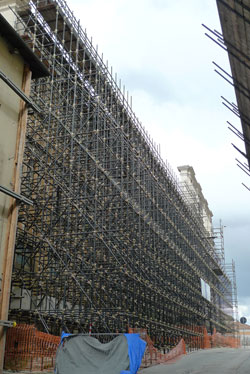 On 6 April 2009 the city of Aquila in Abruzzo was rocked by a devastating earthquake. 308 people died and 2000 people were injured. Around 35,000 residents left the city of Aquila; the other half were first housed in tents, then in new building projects outside the city. The city centre of Aquila has been empty for three years. Buildings were secured with expensive scaffolding, which devoured a large part of the redevelopment funds.

Paris-based artist Veit Stratmann visited this urban non-space on the assumption that as an artist he could respond to this situation with questions. However, he noted that Aquila is a frozen city that defies synchronisation; it absorbs all meaning. Aquila is a huge break from coherence as he otherwise attempts to grasp it in his sculptures and spatial interventions.

In his lecture, Veit Stratmann describes the failure of art in a place that no longer knows in-habitants, but only ex-habitants. He developed the People Counter project: counting gates at all 70 entrances to the city centre of Aquila, which would indicate the temporary visitors in the empty zone. He would have needed government approval for this. But with government approval, i.e. a political will in a political space, this counter would have been superfluous ...

Veit Stratmann developed The Aquila Lecture under the title Impossible Tasks in cooperation with the Project Room in Seattle as part of a research series that was / is dedicated to failure.


As an artist Veit Stratmann has exhibited at galleries around the world since the 1980s including the Museum Folkwang in Essen, the Fondation Serralves in Porto, Sox in Berlin, the Centre d’Art et de Diffusion Clark in Montreal, the CAPC-Musée in Bordeaux, the Project Art Centre in Dublin, Taedok Science Town in Taejon (South Korea), the Institut d’Art Comtemporain in Villeurbanne, the Joan Miró Foundation in Barcelona, the Musée d’Art Moderne de la Ville de Paris and Galerie Chez Valentin in Paris.