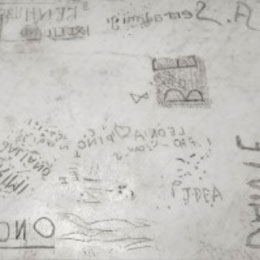 
At the end of their ten-month stay at Villa Romana, artists Shannon Bool and Dani Gal will present their recent works, which were completed in Florence.

The complex friendship between Simon Wiesenthal, the so-called Nazi hunter, and Albert Speer, the Third Reich’s chief architect, is reenacted through the lens of a short text by Ludwig Wittgenstein about memory images. The film looks at the process of creating images of memory and history through filmmaking.

Michelangelo’s Place is a Carrara marble bench referencing the scale of the original benches that surround Piazzale Michelangelo in Florence, Italy. The piazza, built in 1869 as part of Florence’s urban renewal plan (initiated by the rise of an emerging middle class), is dedicated to Michelangelo and includes copies, cast in bronze, of his famous works. Bool archived and then carved selections of the graffiti found on the benches in Piazzale Michelangelo in order to examine how defacement can both subvert and uphold art history.

Also produced during her stay in Villa Romana is the video, Forensics for a Mamluk, where Bool exercises another mode of abstraction; this time the subject is one of the rarest and most valuable carpets in the world. The giant Egyptian Mamluk carpet (from the first half of the 16th century) was forgotten among stored items of the Palazzo Pitti until it was rediscovered in a sealed chamber at the palazzo by Alberto Boralevi, a Florentine carpet expert, in 1982. The video is comprised of segments showing extreme close ups, adjustments of the carpet’s RGB colour palette, and larger pan views of the carpet’s motif and texture. Like Michelangelo’s Place the video is concerned with the complexity of how we (the viewer) experience the overload of the Renaissance in Florence (i.e., the Stendhal syndrome) and the information that exists within material sources that are outside the obvious canon of art.


Shannon Bool, born in Canada in 1972, won the Villa Romana Prize in 2013. She studied, among other places, at the Städelschule, Frankfurt, and lives in Berlin.

Dani Gal, born in 1975 in Jerusalem, was a Villa Romana fellow in 2008. He studied at the Städelschule, Frankfurt and lives in Berlin.