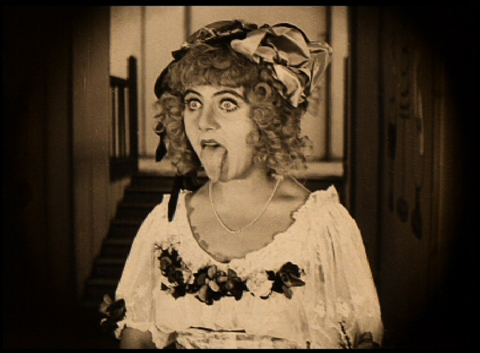 Die Puppe (The Doll) from 1919, an under-appreciated gem of German Expressionism, tells the story of Ossi, the daughter of the inventor Hilarius and her mechanical double. The cult film, belonging to Ernst Lubitsch's German period, is an urban fairytale that reproposes the theme of the double, the homunculus, a concept dear to the avant-garde artistic expressions of central europe in the early 20th century, reinterpreted with a particular anti-eroticising and feminist approach by Lubitsch. Ossi, an imitator of the flapper, the liberated woman with a brisk manner and a tomboy attitude, rejects conventions and crafts a plan for her own liberation. The primary agent of the plot and sole creator of her own destiny, Ossi (the actress Ossi Oswalda), is the irresistible protagonist in her dual role of a girl and the doll. The extraordinary copy of the film obtained directly from the archive of Transit Film in Munich is completely uncut and has never been on display in the cinemas or on homevideo. Completely restored, it preserves the original colour tones and captions.


Letizia Renzini is an audio/video artist and performer. She works with various media focusing her exploration on composition towards different artistic languages. As musician, DJ and director, Renzini works in the fields of new music theatre, performing arts, installations and electronic music/visuals. During the nineties she picked her early name "dj Molli". In that period she worked for independent italian radios and performed in various cafés and clubs both alone and together with dancers, performers and musicians. Renzini played in a DJ impro female trio besides mixing creatively electronics, field recordings, abstract, free, funk, jazz, soul, r’n’b as well as drum and bass, jungle, sound poetry, radio, in solo and music groups. Since 2000 she works for Rai Radio3, where she presents her compositions by mixing new music, jazz, free, impro, electronic, ambient, and techno/breakbeat. She works as a director, performer, DJ and visual artist in theatre, music and contemporary dance contexts such as the Venice Biennial, Muziektheater Transparant Belgium, Stiftung Mozarteum Salzburg, Radialsystem Berlin, Fabbrica Europa Florence and Parco della Musica Rome.