We cordially invite you and your friends to the opening of the exhibition.
Soft Opening: Friday, 12 February, 2 – 6 pm
admission only with registration

Opening hours: Tuesday to Friday 2 - 6 pm and by appointment with mask and according to the spacing regulations 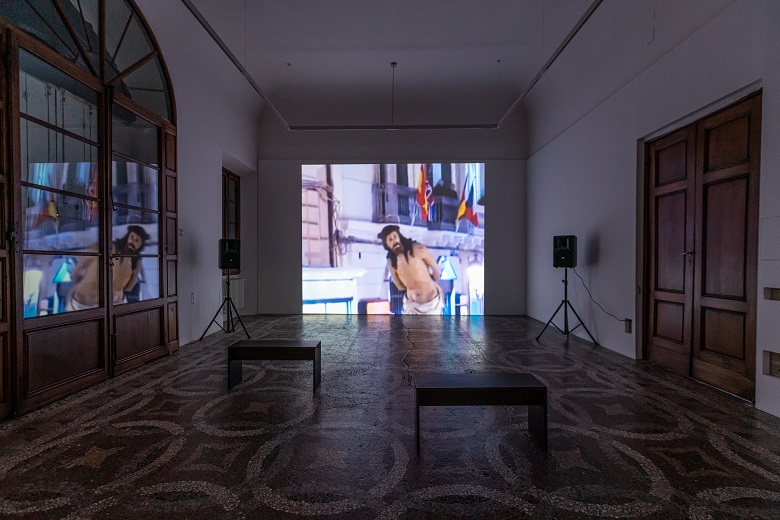 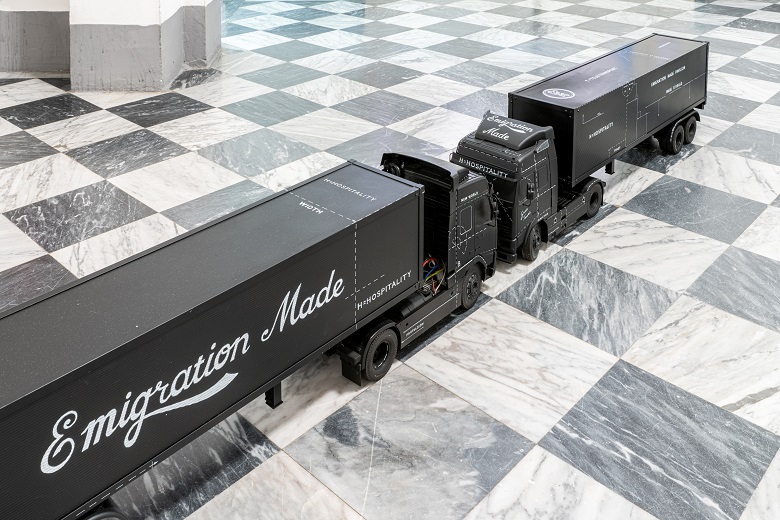 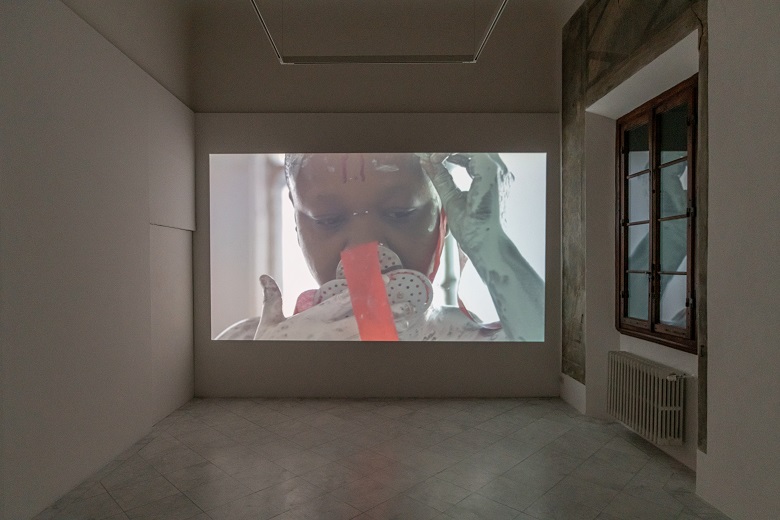 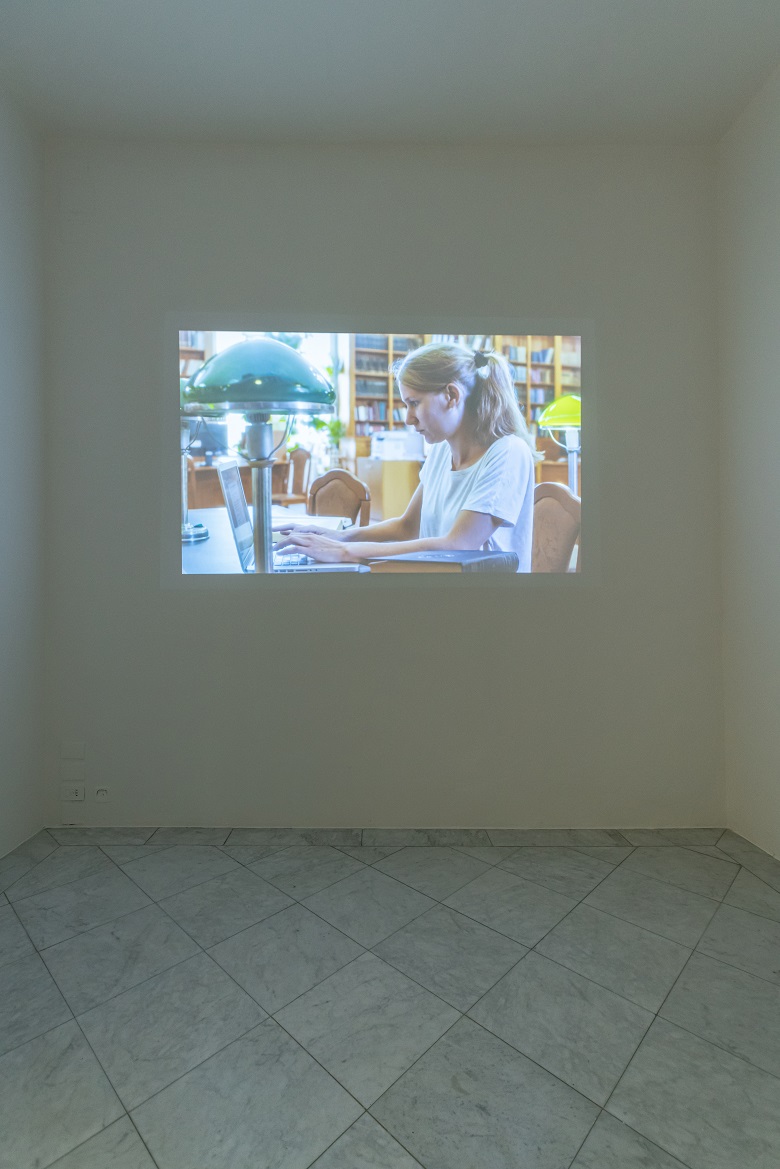 The Villa Romana Fellows 2021 will present their works in a first exhibition - only a few days after their arrival in Florence. It will be an exciting year at the Villa Romana with very strong and international artistic positions. Giuseppe Stampone and Pauline Curnier Jardin were both born in France, Lene Markusen in Denmark and Musa Michelle Mattiuzzi in Brazil. They have been nominated by the artists Susan Philipsz, Peggy Buth, Marinella Senatore and the curator Anselm Franke (Haus der Kulturen der Welt in Berlin) as Villa Romana Fellows 2021. Musa Michelle Mattiuzzi is invited as an International Research Fellow in collaboration with and with the support of the Kunsthistorisches Institut in Florenz - Max Planck Institut. The Villa Romana Prize includes a ten-month residency at the Florentine Artists' House, a grant and a final publication.

Pauline Curnier Jardin was born in Marseille in 1980, lives in Berlin and Amsterdam. She works with installations, performances, film and drawings, and was presented with the Preis der Nationalgalerie in 2019. Her works operate with visual, in part grotesque, narratives from the worlds of theatre, cinema and myth. She constructs optical operas, ethnographic peepshows and brightly coloured, yet dark music films. In 2017 she presented her installation Grotta Profunda, Approfundita at the 57th Biennale in Venice. She has participated in numerous international exhibitions and festivals at, among others, Tate Modern, London, International Film Festival Rotterdam, Schirn Kunsthalle Frankfurt, Performa 15, New York, the Fondation Cartier pour l'Art Contemporain, Paris, Migros Museum of Contemporary Art, Zurich, MIT List Visual Arts Center, Cambridge, Haus der Kulturen der Welt /House of the Cultures of the World, Berlin, Palais de Tokyo, Paris.

Lene Markusen was born in Denmark in 1973, studied, lives and works in Hamburg. She takes a quotidian-ethnographic and cinematographic perspective in her artistic-filmic work. Films such as GRAD (2004) or Sankt – Female Identities in the Post-Utopian (2017) reflect the extensive and conflict-ridden transformations taking pace in female lives and their worlds of work and consumption through a post-utopian, feminist and narratological perspective. Lene Markusen recently published the art book Sisters Alike. Female Identities in the Post-Utopian. In recent years, she has participated in exhibition projects such as Books on Films, Spector Books /Cineding, Leipzig (2020), New Alphabet School, # Caring. Agro-zentrisches Denken: Wege zu einer kollektiven biografischen Imagination?, Haus der Kulturen der Welt, Berlin (2020), Postcosmetic META-morphoses, BeFem Festival, Belgrade (2019) and The Body as an Indexical Reader, Moscow Museum of Modern Art (MMOMA), Moscow (2018). From 2011 until 2017 she was a professor at the University of Fine Arts, Hamburg.

Musa Michelle Mattiuzzi was born in São Paulo in 1983, now lives in the Brazilian city of Salvador. She is a performer, author and researcher. Her work is particularly concerned with the body of the black woman and how it is designated an exotic location. She explores colonial wounds and the development of an anti-colonial poetic. In 2016 she participated in the 32nd Biennale of São Paulo and published her text merci beaucoup, blanco! as part of the Political Imagination Workshop. In the following year (2017), she took up a place in Athens with the Capacete Residence Programme - documenta 14 and won the prize for the best short film at the X Janela Internacional de Cinema de Recife with her film Experiencing the Flooding Red. In 2018 she participated in the São Paulo Biennale once again as part of the project Afro-affective Affinities. From 2017 to 2019 Mattiuzzi collaborated with the exhibition project Liebe und Ethnologie – die koloniale Dialektik der Empfindlichkeit (nach Hubert Fichte) (Love and Ethnology – the colonial dialectic of 'Empfindlichkeit' (after Hubert Fichte)), which was concluded in the Haus der Kulturen der Welt in Berlin.

Giuseppe Stampone was born in the French town of Cluses in 1974, now divides his time between Rome and Brussels. His artistic work – whether in the form of detailed, miniature biro-drawings or roomy, spatial installations – is characterised by a critical engagement with the so-called achievements of western civilisation and its consequences, such as racism and exclusionism. He reinterprets incunables from European art history and interrogates the role of the artists, their education and their collaborations. In 2008 – together with Maria Crispal – he initiated the network Solstizio (www.solstizio.org), where artists, researchers, foundations and associations engage with global themes such as the environment, social conflicts and sustainable economies. Stampone's works have been exhibited at international exhibitions, museums and biennales, such as the 2018 Biennial of Architecture in Seoul, South Korea, the 56th Venice Biennale (2015), the Biennial of Kochi-Muziris, Kerala (2012), the 11th Biennale in Havana and the Liverpool Biennale (2010).