We cordially invite you and your friends to the opening of the exhibition.
Soft Opening: Friday, 18 March, 4 – 8 pm

Opening hours: Tuesday to Friday 2 - 6 pm and by appointment in compliance with anti-Covid regulations 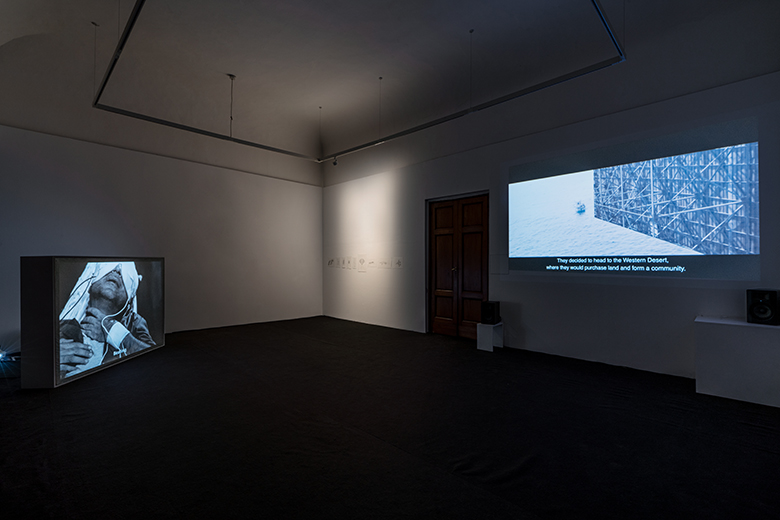 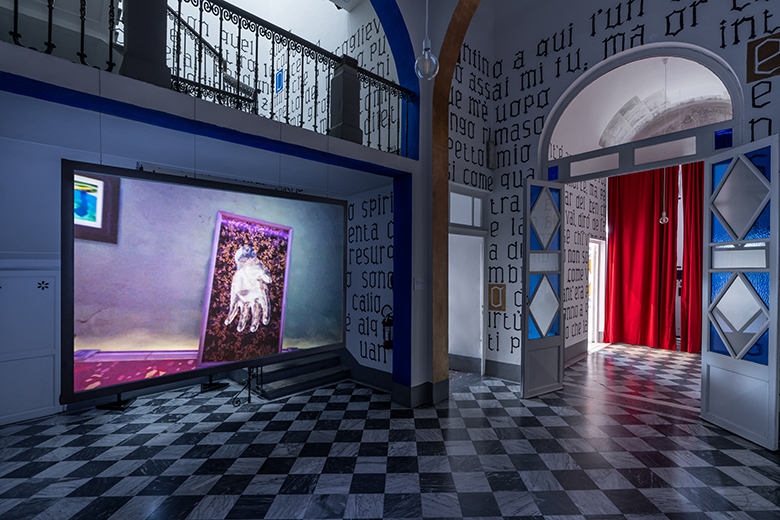 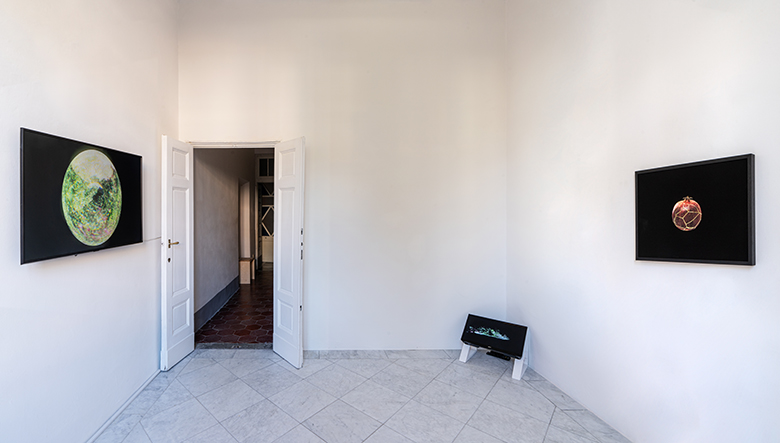 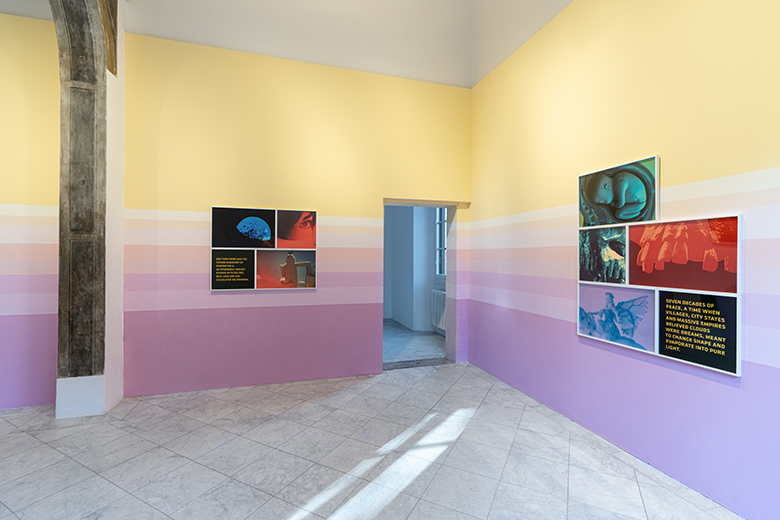 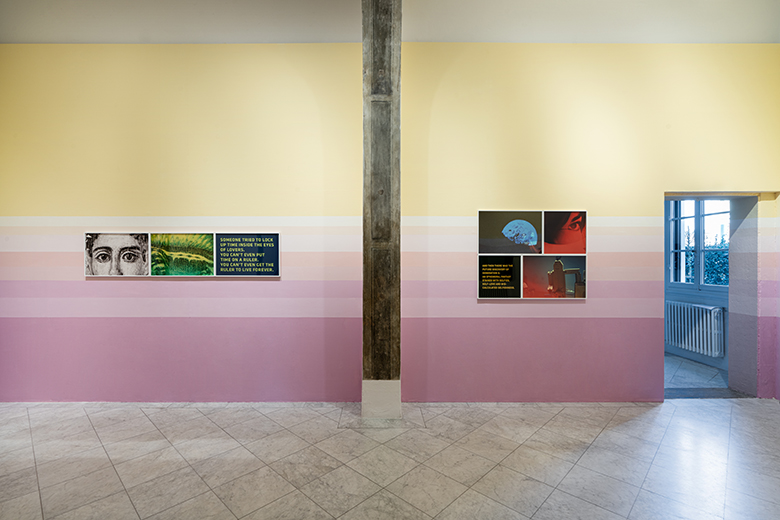 The Tellers grew out of the same question that had also previously led to the digital exhibition A Whole Population of Poets presented on Sumac Space – a platform devoted to Contemporary Art from the Middle East through programs, critical writing, and research.

After the Green Wave of Iran in 2009, I have always carried a duality of optimism and anxiety about the future with me: a future that I will never be able to articulate as a time-based event. Rather, I would like to see my future as scrolling through a timeline on a post-production application, one that I can navigate freely without an obligation to snap to a specific date.

I am experimenting with a few methods to transform this anxiety. One of the most powerful tools is one's imagination and the landscapes one draws while dreaming. To me, this dreamland serves as a form of resistance to the world as I experience or perceive it. I am aware that this is not a promise for another universe or an offer to withdraw from this one. Still, it does assist me in creating conditions for a different mode of being within the already existing one.

The Middle East's past unfolds in a series of interconnected forms. It includes - as elsewhere - shifts in people's lives as well as the lives of groups, cultures, and countries over time. It encompasses the narratives that people share of themselves and others in relation to these transitions, the myths that help them make sense of their experiences and attempt to illuminate the way into the future, and a tool for creating a new landscape as a chance to escape from pre-existing power structures.

In The Tellers, the artists invite us into a fictitious time. Constructing future scenarios acts as a form of temporal feedback loop, connecting these futures to the present or the remote past. They are speculations in the form of insights that relate to an object, a place or even an event. These are in the future or have long since passed, whether imaginary or simply so traumatic that it escapes memory. Artists use storytelling to construct new myths and histories, question forgotten and suppressed history, and use it as a simulacrum for social critique. To them, becoming a teller entails an act of examining narratives and building new truths outside the dominant cultural history. They challenge one to understand the other's perspective, welcome one to their new worlds, and make one walk on a blurry line between real and unreal.


In conjunction with the exhibition The Tellers, Villa Romana will host a one-day symposium on Saturday, 19 March 2022, starting at 11 am. The symposium aims to propose and discuss key points of the exhibition through contributions by Raffaella Baccolini (Università di Bologna, Forlì Campus), Bodhisattva Chattopadhyay (Associate Professor in Global Culture Studies at the University of Oslo, Norway), Nat Muller (Independent curator, writer and academic), and Santiago Zabala (Research Professor of Philosophy at the Pompeu Fabra University in Barcelona, Spain), followed by a public debate, and concluding with a lecture-performance by Mohamed Abdelkarim.

Sumac Space is a platform devoted to Contemporary Art from the Middle East through digital programs, critical writing, and research. In particular, Sumac Space focuses on dialogues as a medium for presenting diverse forms of research. This format stimulates interaction and polyvocality and encourages critical thinking and intimate conversation that is not limited by physical distance or particular means of expression. Sumac Space also uses digital programs to activate the role of artists and curators in re-imagining and shaping our times and aims to provide a public space for their research and diverse forms of expression.


Mohamed Abdelkarim is an artist, performer, filmmaker, and researcher living and working between Cairo and Maastrich. He received his MA in Arts in public spheres from édhéa /ecav, CH, 2016 and is currently Ph.D. candidate at the Akademie der bildenden Künste in Vienna.
Abdelkarim's practice is performance-oriented. He considers performance as a research method and a practice through which he produces texts and images that embody multiforms. He employs and reflects on performative acts like narrating, singing, detecting, doing, fictioning and, recently, speculating. His recent umbrella project focuses on the agency of the landscape as a witness of "a history we missed and a future we did not attend yet".
His works have been included in the Sharjah-biennial 11, Guild Master of Cabaret Voltaire, Manifesta 11, Live Works Performance Act Award Vol.5, IT and Berlinale 72 /Forum Expanded, 2022.

Ali Eslami is an artist and engineer from Iran based in Amsterdam who has been active and experimenting with irtual reality since 2014. His work involves long-term research projects that build up and grow over time through speculations and world-building by carefully observing the nature of reality, the human condition, and constructs that are taken for granted, and trying to push it further to extreme or twisted thresholds.
An obsession with cybernetics deriving from his engineering background leads to creating worlds in aspects of both form and function. These experiences manifest as realities that blur fictional and non-fictional narratives, striving to articulate possible futures while questioning the restraints of space, time, and body.
In 2016, his VR project won the IDFA DocLab Award for Best Immersive non-fiction and in 2020 the Golden Calf for Best interactive at the Nederlands Film Festival (Nerd_Funk). Aside he is co-curator at STRP Festival and programme advisor at IDFA Doclab.

Maha Maamoun is an artist, curator, and independent publisher. Her work examines the form, function, and currency of common visual and literary images as an entry point to investigating the cultural fabric that we weave and are woven into. She is co-founder of the Contemporary Image Collective (CIC), the independent publishing platform Kayfa ta, a member of the curatorial team of Forum Expanded (Berlinale), and a member of the Akademie der Künste der Welt (Academy of the Arts of the World), Cologne.

Basim Magdy is an artist and filmmaker. His films, paintings, and photographic works are layered with poetic details and colourful observations that allude to absurdity as a daily occurrence. His work mixes humour with fiction, historical references, and collective delusion ­– all of which seem to be trapped inside a confused sense of time where the past, present, and future constantly switch places.
Magdy's work recently appeared in solo exhibitions at Röda Sten Konsthall, Gothenburg,  M HKA, Museum of Contemporary Art, Antwerp, MAAT Museum of Art, Architecture and Technology, Lisbon, La Kunsthalle Mulhouse, FR, MCA Museum of Contemporary Art, Chicago, MAXXI Rome, Jeu de Paume, Paris, CAPC Museum of Contemporary Art, Bordeaux, Deutsche Bank KunstHalle, Berlin and in group shows at MoMA and Centre Pompidou among others.