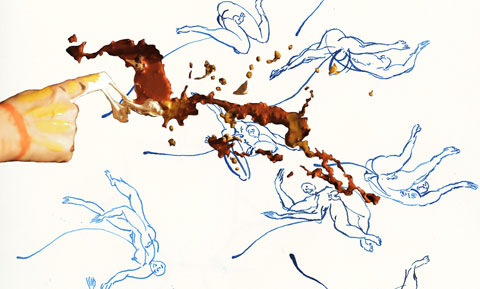 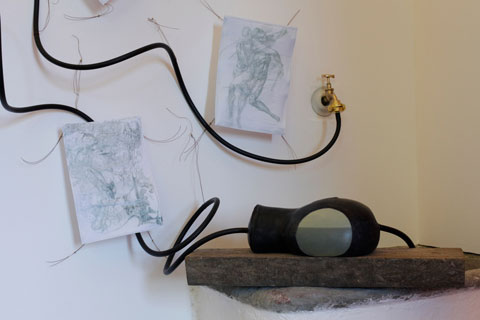 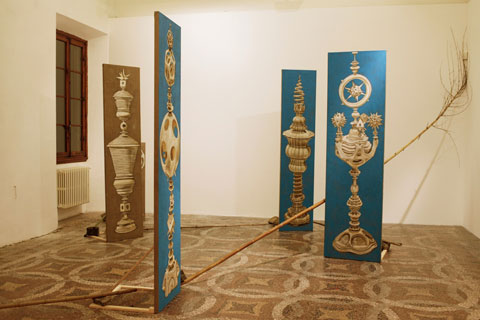 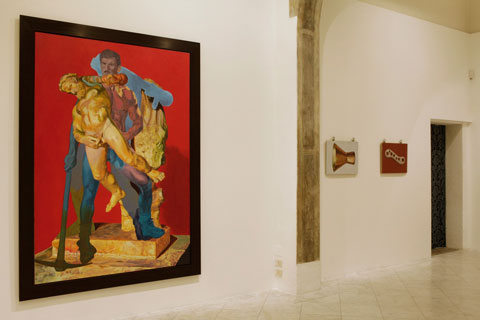 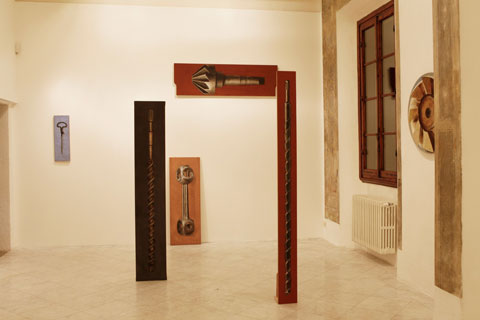 Antje Majewski and Piotr Nathan live as artists in Berlin and both practice a type of figurative painting that, together with their motives and choice of subject can take on surreal or magical characteristics: Figures escape from their stencilled shapes or come together in improbable encounters. As well as this rather superficial similarity, the two artists'work is also linked on a level that operates with terms such as donation and surrender.

In the case of Antje Majewski (born 1968 in Marl) the image takes on a kind of intermediary status between subject and narration/context. It concerns the transfer of objects and meaning to painting and vice versa: from the image to utopian scenarios. Following her intensive tracing of the international value of seven objects (The World of Gimel. How to Make Objects Talk., Kunsthaus Graz, 2011), whose meaning and treatment she researched on various continents and communicated in paintings and videos, Antje Majewski is now showing two new series of paintings at the Villa Romana: the Elfenbeintürme (Ivory Towers) position canvas steles as absurd governors in the space. Her image motives are oversized portrait-style imaginations of miniature carvings from the 16th century. Conversely, in the series Werkzeuge (Tools), she enhances the status of banal traditional tools to icons of painting.

Piotr Nathan (born 1956 in Gdańsk) has for many years dedicated himself to the work of Jacopo Pontormo and his life drawings. For Piotr Nathan these reflect his own subject: the human/male body in its fragile balance between pleasure and power, and transgression and subjugation. In the exhibition, Piotr Nathan shows, alongside an large-scale ironic-subversive painting of Herkules (Hercules), a series of delicate sketches after Pontormo, as well as a wall sketch completed on site , which is only granted evidence of its existence for a limited time. Piotr Nathan has already realised these types of wall sketches in various exhibition centres. They can be seen as a trace of his body and a representation of a fragmented dedication to the subject. The calling into question of the internal and external nature of man as well as moments of poetry and the of abyss pervade the paintings and sketches of Piotr Nathan.

The title of the exhibition, Il giardino dei corpi (The Garden of Bodies) was chosen by both artists and plays on the ambivalence of beauty and convenience, as well as of form and uninhibitedness.

The two artists have exhibited internationally since the 1980s and 1990s respectively.
Piotr Nathan's work has been shown at venues including Kunst Werke Berlin (1992); the Whitechapel Gallery, London (1993); the Haus der Kunst, Munich (2001) and the Nationalgalerie im Hamburger Bahnhof, Berlin (2002). Antje Majewski has exhibited at galleries including the Malmö Kunstmuseet (1995), the Städtisches Museum Abteiberg, Mönchengladbach (1998), the Kunsthalle Basel (1999), the Generali Foundation, Vienna (2004) and the Salzburger Kunstverein (2012)