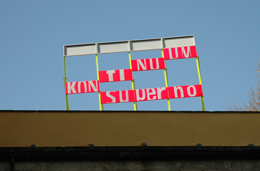 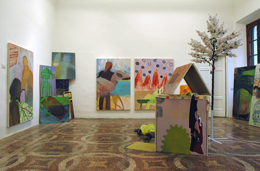 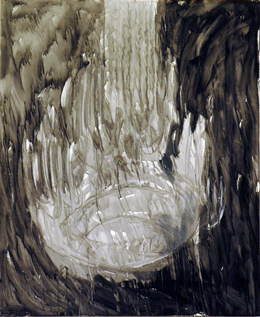 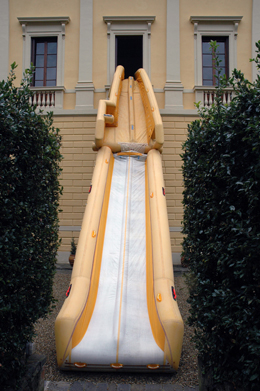 This year the Villa Romana Fellows have been living and working in Via Senese in Florence for seven months. On the completion of their stay they present their current works in a joint exhibition. Most of these works have been created in Florence.

During her time in Florence Andrea Faciu has continued working on the project she started in Brno called “Touching the City”. Her video represents actually touching a city. The city brings its own material language to the image while at the same time revealing an intimate hint of social and emotional contact. Andrea Faciu was born in 1977 in Bucharest. She studied with Olaf Metzel in Munich and has already been presented with numerous prizes for her installations and videos. She took part in the Cetinje Biennale 2006 and the Manifesta 5 in San Sebastian amongst other exhibitions.

Barbara Kussinger was born in 1970 in Freising. She is a painter and was in Günter Förg’s master class at the Munich Academy of Art. Her painting thematises the human figure and its environment and considers it from an internal perception and composition. Often it has multilayered scenes which produce double meanings to the point of being picture puzzles which can be seen in different ways. As well as two-dimensional colour paintings, she has also created numerous paper works in Florence. In exhibitions, Barbara Kussinger’s pictures also interact with other textile materials and relicts.

Silke Markefka was born in 1974 in Mühldorf. She too studied with Günter Förg in Munich and completed his master class in 2006. Her painting deals with the boundaries between the abstract and graphic contents of the image. She is interested in the blurring, the disappearance and the recurrence of memories which interact with graphic perception and the connected associations of sensation. Silke Markefka often works with series of motifs for example using the themes chandelier, archive and draperies. Here in Florence she has also used the theme tourists.

Michail Pirgelis was born in 1976 in Essen and grew up in Xanthi, Greece. He studied at the Düsseldorf Academy of Art with Rosemarie Trockel und Martin Gostner. He creates his sculptures from materials at hand; recently he has often been using aeroplane parts. Using precise cuts, surface treatments, displacements and duplications he transforms the material into autonomous sculptures which despite all their perfection testify to current values and loss (of utopia). Michail Pirgelis’ sculptures have attracted attention in recent years in various exhibitions in Germany and Holland.