7 pm
The film director and several actors will be present. 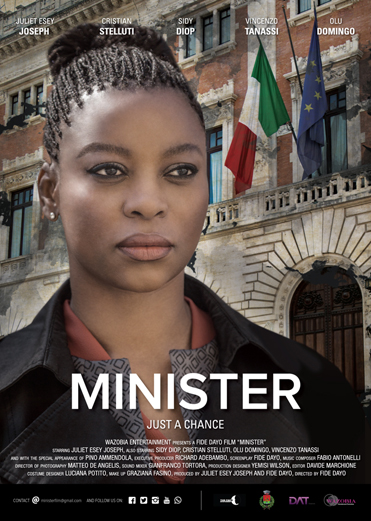 Kemi(Juliet Esey Joseph) leaves her home in Nigeria following the assasination of her father, an activist. On arriving in Italy Kemi finds her first job in a bakery and begins to build her life as a single mother with her daughter Buki (Amina Ekundayo.) Twelve years after her arrival in Italy Kemi runs in to her brother Banky, a street musician, in Ancient Rome. The two share a home with her daughter Buki. Eventually, Kemi turns her hand to fashion with the Nero fashion company where with the introduction of ‘adire,’ an indigo textile, she saves the company from bankruptcy and introduces new reforms for the workers. Minister is an exciting drama in which people’s opinions are shattered and divided in a country where immigration is still considered a threat. Dario’s (Massimo Trigiani) appointment of Kemi as Minister for immigration is a turning point in the movie. Here we see Kemi’s joyful moment torn by conflict with her daughter Buki who has difficulty accepting her mother’s position as Minister and the racial threats presented by Ricardo (Vincenzo Tanassi), a political party leader. Kemi’s mind is shattered between the conflict with Buki, and the tension with Riccardo, so eventually she decides to resign as minister. Meanwhile, Banky takes over the administration of the company and revokes all the reforms laid down and attempts to fire Jimi, but Jimi retaliates and kills Banky. The ambitious Jimi decides to take over the Nero fashion company and so he holds Buki to ransom and threatens to take her life. Kemi gets the better of Jimi and saves her daughter Buki’s life. They go back to their life as it was in the begining working in the bakery.


Fide Dayo  is a Nigerian filmmaker born into the Ekundayo family in Lagos, Nigeria. His father was a local builder and his mother a seamstress in Yaba (Lagos). Fide was raised in Lagos during the Bruce Lee era and the era of romantic indian films along with the famous television, comedy series The Village Headmaster. However, this was by no means the influence that would spark his career in film. Rather it was during his time living in Florence, Italy, where he studied architecture that his true inspiration for film creation was born.

His first shortfilm is The girl with the little black book, in (2000). Followed by a series of other short films: The front line (2001), Diaspora (2002), Fuga (2004), That Day (2006). Two documentaries: Who are the Yoruba’s (2008), Identity on the move to integrate different worlds (2009). Finally, Fide had a breakthrough with his first feature film Ben Kross (2011) in which he played the lead role as Ben Kross, a Nigerian immigrant worker, in Italy, who takes the risk of loosing his entire pension as a result of Italian government bureaucracy. Ben Kross was nominated as best film by an African film director living abroad, by the African Movie Academy Award 2012, (AMAA). In 2016, Dayo launched the film, Minister.