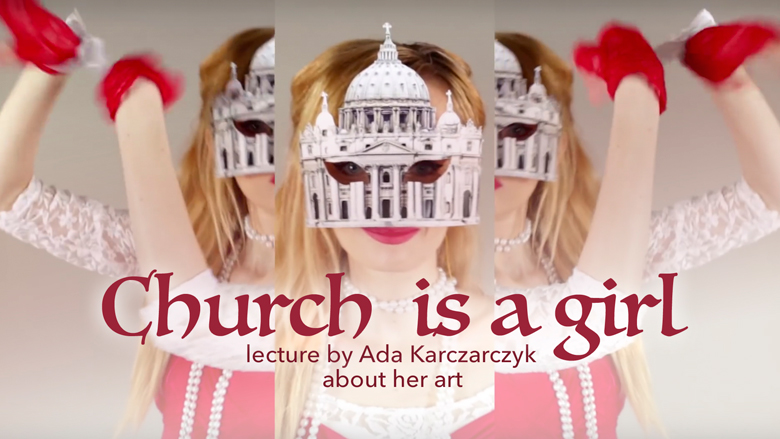 Ada Karczmarczyk, Church is a girl, Still from video, 2015

During her lecture, Ada Karczmarczyk will give us the opportunity to get to know her works and hear about the context in which they were, and are, created. The artist will talk about the stages in her life that inspired her works, about the situations that accompany them, surprising events and quirks on the road of life. We will have the opportunity to learn the stories behind the works that evoke such extreme emotions and mixed feelings in ecclesial and artistic communities due to the avant-garde and pop art forms the artist uses to transmit spiritual messages.

What led her to the transformation and what was her earlier artistic work about? Are her actions a manifestation of missionary intentions or, instead, a performance? Has she managed to evangelize anyone? What reactions and difficulties does she encounter due to her unusual artistic actions? Why does she consider the Internet the perfect place to proclaim spiritual messages? Does her vision of encouraging ecumenical dialog through colorful music clips have a chance to unite Christianity? What reactions and responses from the public and the media does she receive by combining opposites? What is the reaction to productions about patriotic or traditional issues presented in an unusual way? The artist will attempt to express her thoughts on these issues during the lecture, presenting the most outstanding pieces of her artistic output.

Ada Karczmarczyk is guest artist at Villa Romana from September to November 2016. She received the working grant of the Views-Prize 2015 for young Polish art sponsored by the Deutsche Bank Stiftung, Deutsche Bank Polska and the Zacheta National Gallery Warsaw.