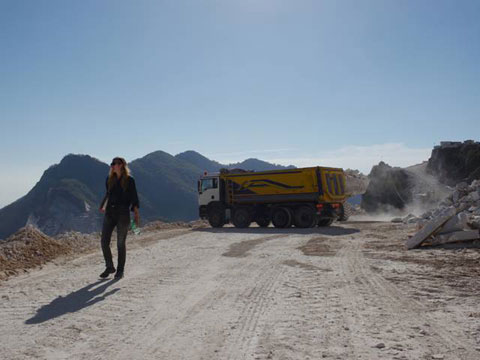 
The Carrara mountains were being quarried when white marble was taken for the sculptures of Michelangelo. It is an extremely dissected and disassembled landscape focused entirely on the production of this commodity - and production means excavating the production site. Within the mountain, within the blocks, are potential objects, waiting to be excavated. Until then, the material and landscape are contained within a strict grid.

The removal of the marble has been perfected to such a degree that it seems to lose its physical properties. Immediately upon being removed from the ground, the blocks look clean and smooth; the fact that the stone can be cut this way makes it appear soft. The lorries drive along the mountain ridges like miniature cars; they seem to bear no weight at all. The excavation of the mountain entails making consecutive layers of horizontal and vertical cuts that are so straight and perpendicular that the sections look like rooms and hallways. The mountain is being domesticated; it looks like a huge, stripped house. This is where Sophie Reinhold has set up her studio. It looks like an ancient theatre stage. On the wall is an image, a marble image created by excavation. She has simply cut a rectangular section from the mountain.

One images that cutting the side of a mountain would be like trying to groom a wild horse, but here the redemption of this type of production and the concept behind it is emphasized by reduction - it has already taken place. Her scrutiny of the image fluctuates between concentrating on the image and the awareness of being filmed, between studio and stage. Landscape and time stand still, like a filmed photo. Do mountains grow back?

The very slow zoom out runs parallel to the gaze of the artist, which goes from focusing on the two-dimensional image to its three-dimensional context. In doing so, the image is almost lost in the geometric structure of the landscape and the surface is replaced by nearby blocks being removed. As a producer too, Sophie Reinhold is lost somewhere in the depths of the production landscape and suddenly emerges in front of the camera only at the very end as she walks right across the screen. In this moment she herself becomes the viewer and the last few minutes are implicitly redefined: her disappearance is in fact the literal transition from one level to another, a parallel to the abstraction of the image and the landscape itself.

Her initial view of the image is also redefined at the end. While she initially still seems to command the site, it soon becomes clear whose territory it is, as lorries come into the picture and drive through the studio. What at first glance seems like a final check on an image that is perhaps about to go public, is actually a goodbye. Its fate can be foreseen. This raises the question of whether an artistic and historical approach to dealing with the precious marble is possible and also questions the value of artistic production itself within a purely materialistic and self-deconstructive structure.

Sophie Reinhold has been Villa Romana-Fellow in 2012.

Nora Schultz has been Villa Romana-Fellow in 2011.