Memories in Stone: a Screening
curated by Cecilia Canziani and Maya Schweizer

The landscape is punctuated with monuments: sculptures inhabiting the public space, that bear witness of historical, often traumatic, and sometimes celebratory events. Until the Second World War, the monument has held a pivotal social and aesthetic function in the construction of public memory, narratives, and consciousness.
Today, the commemorative monument seems incapable of collectively representing history. How do we represent history, transmit memory, and give form to trauma, then? Does the monument outlive history? Does it recount it?
Articulated around two themes, the screening addresses preoccupations on the material form of memory, analyzing the relationship of contemporary artists with monuments through observation, documentation and performance as a way to rearticulate in the present the memory of historical facts that they bear testimony of. 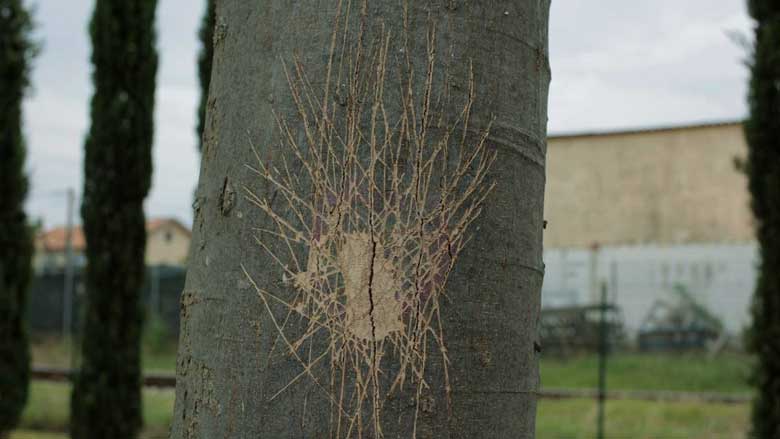 In his experimental short film Brutalität in Stein (brutality in stone), Alexander Kluge demonstrates how Nazi architecture used dimensions of inhuman and super-human scale to bolster the regime's politics of the same kind. Shots of huge neo-classical architectural structures from the Nazi period are confronted with equally anti-human national-socialist languages a voice-over.

A video, in which the daily routine of Les Milles is caught up by its past - a former brickyard in the town's center was used as internment camp for Germans during World War II and served as concentration camp later on. With the use of montage cutting techniques the artist succeeds in letting the past burst into present.

The film The Head is edited out of existing footage and photomaterial from the 60's and 70's featuring process of creation of the largest head (portrait) monument in the world modeled by sculptor Lev Yefimovitch Kerbel. This monument to Karl Marx was erected in Karl-Marx-Stadt (now Chemnitz) in 1971. All the used materials for this film were produced by official DDR Television for the purpose of information and propaganda. It documents a unique process in its scope and intensions, which could be understood as anachronistic, or sharply contradicting with current aesthetics of public spaces in most European cities.

Raphael Zarka filmed the area of Gibellina several times. The Cretto is a memorial to the victims of the earthquake that destroyed the whole Valley of Belice in Sicily in 1968, and is also a grand public sculpture by Alberto Burri that can be practiced. By walking through it, the visitor retraces the alleys of the old village. Raphael Zarka’s film is composed of fixed images that map the area, and explore the site as resulting of memory and the present, sculpture and action, performance and stillness.

Zmijewski’s film documents the mounting of A Dream of Warsaw, the last exhibition by Oskar Hansen – Polish architect, urban planner, theorist and teacher. Hansen proposed architecture as an open-ended process, allowing the user to actively shape and participate in the work. In the 1960s he further developed his theory, arriving at ‘Linear Continuous System’ which took the ‘open form’ thinking to larger scale projects such as regional and national plans. A long-term lecturerat the Warsaw Academy of Fine Arts, Oskar Hansen has influenced a number of Polish contemporary artists. A Dream of Warsaw opened at Foksal Gallery Foundation on February 2005 and exhibited a TV tower counterbalancing the Stalinist Palace of Culture and Science. The documentary intertwines scenes of Hansen’s collaboration with sculptor and performance artist Pawel Althamer with scenes from Oskar Hansen’s funeral, who died while Zmijewski was editing the film.

Il processo (The Trial) focuses on the “April 7 trial” (1983-84) against the members of the leftist revolutionary movement Autonomia Operaia. Biscotti’s research started in 2006 shortly before the building underwent a major transformation from a court to a sports museum. The film is part of a larger installation consisting of concrete sculptures made from casts of the architectural features of the courtroom, taken before their demolition. These are accompanied by a six-hour audio edited recording of the “April 7 trial.” Defendants in the court case included the philosophers Antonio Negri and Paolo Virno and other intellectuals accused of being ideologically and morally responsible for Italian terrorism developed in the late 1970’s. The film traces a performance held in the high-security courthouse, designed by rationalist architect Luigi Moretti in 1934, in which the trials took place.

The film shows the public park of the Villa Torlonia which is built atop of several catacombs. The camera observes and scales the surface, it captures details and long shots from different perspectives. Foundfootage and contemporary material are superimposed into a portrait of the Villa that never reveals its rationale. In tuine with Maya Schweizer’s approach that call for acts of contextualization without providing ready interpretations, the Villa Torlonia is presented as a puzzle piece of history, which must be put into place.

This newly assembled work is a rare document of a 1976 Matta-Clark performance in Berlin. The piece begins with the following statement: "In 1976, as part of the Akademie der Künste and Berliner Fest wochenexhibition Soho in Berlin, Gordon Matta-Clark went to Germany with the intention of blowing up a section of the Berlin Wall. Dissuaded by friends from such a suicidal action, the result was the following performance." The film records Matta-Clark as he stencils 'Made in America' on the Wall, affixes commercial advertisements over graffiti, and has a run-in with the police. A remarkable record of a little-known Matta-Clark performance, this work is also a historical time capsule of a political and physical landscape that no longer exists.

Six musicians dislocated in six different underground rooms of a historical building, the Rocca di Verrua Savoia, improvise a session starting by the same tonality, and following their own rhythm in a collective yet intimate performance, as a way to commemorate the death of the six victims of the landfall of the Rocca onto the houses beneath, in 1957.

Real Remnants of Fictive Wars PART V is a film depicting a cloud of smoke engulfing a romantic landscape, as a violent yet mesmerisingly beautiful act.

Produced by Fondazione Sandretto Re Rebaudengo and the MAC, Belfast, with support from Iaspis (the Swedish Arts Grants Committee's international programme).
Set to a soundtrack inspired by experimental musician Franco Battiato, Billing's video follows a group of Italian children running around the streets of Rome, seemingly doing what they like. Their adventures culminate in an empty school, where they start to play around with troves of outdated educational tools and equipment. Influenced by her time in Rome during protests against university reforms in 2010, Billing's piece mines Rome's history of progressive pedagogy and allude to psychoanalysis, Pier Paolo Pasolini and Bruno Munari as well as championing the early tradition of Italian filmmakers, who in their often biographical films about the 40s and 50s, focused on the freedom of children exploring their city as a way to reflect upon historical and the societal changes.