You and your friends are cordially invited to the opening of the exhibition on Saturday, 27 June from 2 to 8 pm. 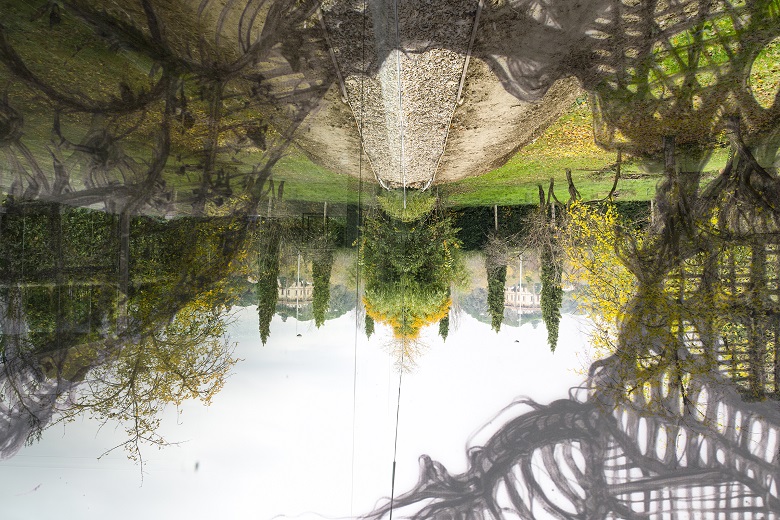 In coltura (In cultivation) is a site-specific installation created by Leonardo Moretti for the pavilion of Villa Romana. Dense wefts of lace sprout and expand with almost vegetal spontaneity, invading the glass structure to the point of reconfiguring its external appearance and integration in the natural surroundings. The installation is a further development of Lace: a series of works on sundry supports in which lace, synthesised and modulated in a process of repetition and dilation, interprets the eternal dialectic between essence and appearance. This sinuous and distinctly decorative element — an emblematic manifesto of superficiality and frivolity — represents the perfect pretext for inviting the observer to reflect on the superficial, conceptual and inauthentic images of itself that our society tends to produce.

While inside the glasshouse the lace is still in embryonic form, its growth sustained by neon strip lights, on the walls it expands to take over the space in the same way as a progressively growing vegetable organism. The free and substantially not preordained forms of evolution are offset by precise chromatic choices. Blue, red and black not only represent for the artist the three temporal dimensions of past, present and future, but also respectively symbolise memory, vitality and death. Consequently, taken together the three colours are a metaphor for existence as a whole, now encapsulated by Leonardo Moretti in the microcosm of the glasshouse. Nevertheless, the stability of these colours, so characteristic in semantic terms, is put severely to the test by their constant and complete exposure to the elements. It cannot in fact be ruled out that the colours may change to other, less brilliant, shades from the first few days onwards. This eventuality, which would definitely alter the entire work, is fully encompassed as an integral part of the artistic operation, the outcome of which is largely entrusted to how good the year is, and hence to chance, exactly as if it were any other cultivation. By evading the full control of its maker, In coltura thus appears as a work open to change, lively and dynamic in its form and content and in open dialogue with the place that houses it and from which it draws sustenance.