We started our collaboration in May 2021, just after Morocco opened its border along the Spanish enclave of Ceuta in retaliation for Spain admitting Brahim Ghali, president of the Saharawi Arab Democratic Republic, to hospital for a severe case of Covid-19.1 This prompted Morocco to step back from policing its border with Ceuta, allowing 8,000 migrants to enter Spanish territory. Spain, in turn, immediately deported 6,000 of them back to Morocco, in contravention of international law requiring asylum seekers to be granted a hearing on their asylum claims. The Spanish government was backed by the European Union, who condemned Morocco’s behavior but failed to chastise Spain’s legal breach.

Only a few months later the migration issue would be instrumentalized again, this time on the EU border with Belarus—Lukashenko’s revenge for EU sanctions against his regime that followed the rigged election of 2020. Belarus expedited transit visas for refugees from Iraq, Afghanistan, Syria, and elsewhere, then facilitated their onward travel to adjacent EU states along its vast “Grüne Grenze,” the rural "green" border to its north and west. In short order, Lithuania, Latvia, and Poland declared a state of emergency along their border with Belarus, sending thousands of soldiers to the area, creating a two-mile deep militarized zone complete with razor-wire fencing and imposing a media blackout. What former US president Donald Trump demanded of Mexico, that it build a wall between itself and the United States at its own expense, Lukashenko had now achieved "for free": no one can flee Belarus any more.

In this time, we were also monitoring other situations that we consider a continuation of efforts to fortify Europe against migrants, which came to a head during the political crisis of 2015–2016, when millions of Syrian refugees sought to enter Europe to escape war.

Less than half a year after Poland first declared a state of emergency along its Belarussian border, it would be welcoming refugees from Ukraine with open arms.2 Throughout Europe their flight has not been delegitimized or criminalized, revealing the EU’s willingness to embrace refugees and establish a political consensus around their treatment. However, the reception given to people of colour studying at Ukrainian universities also made plain a racist dimension to Europe’s migration and asylum policies. European states have continued to pursue neo-colonial relationships with the Global South long after the end of the colonial era, viewing countries there largely as a source for raw materials, fomenting political and economic instability without taking any responsibility for the ensuing violence. All the while, the EU presents itself as an upholder of democracy and human rights on the world stage. It is precisely this racist double standard we wish to critique with our project.

In this respect, our work is an appeal for migration and asylum policy in the EU to change fundamentally, alongside economic relations with the Global South. We wish the hospitality extended to Ukrainian refugees might be given to everyone fleeing impossible situations, regardless of their ethnicity. We wish solidarity with all those who are forced to flee! Legal escape routes to Europe! Defend and implement human rights!

[1] Between 1976 and 1991 the Saharawi people were at war with Morocco after the latter invaded what was then a Spanish colony, forcing a majority of its population into exile—a conflict that has yet to be resolved.
[2] 3,418,077 refugees as of May 17, according to the UNHCR.

Michael Baers is a Berlin-based artist and writer known for his research-based comics and drawing projects. Since 2010 much of his work has focused on the fraught relationship between the MENA region and the West: ongoing research concerns the mass media and the Western Sahara conflict. He received his PhD from the Academy of Fine Art Vienna in 2014 and since 2020 is an affiliated researcher at Leibniz-Zentrum Moderner Orient (ZMO) in Berlin. Baers has exhibited his artistic work internationally in many institutions, including the Van Abbemuseum, Haus der Kulturen der Welt, and MAK Frankfurt am Main. He has also contributed to numerous books, journals, and publication projects. His 2014 graphic work, An Oral History of Picasso in Palestine was featured at the Third Berlin Documentary Forum.

Thomas Kilpper is an artist working preferably site-related and with a wide range of media – installation, sculpture, graphics, photography, video. He studied Fine Arts at the Staatliche Kunstakademie in Nürnberg, Düsseldorf and Frankfurt am Main where he accomplished his ‚ Meisterschüler‘exam at Städel; he received the Hap-Grieshaber Prize in 2003 and the Villa Romana Prize in 2011. Since 2008 he has been developing his long-term project A Lighthouse for Lampedusa!, he lives and works in Berlin. Projects include: The Ring, London (2000), State of Control, Stasi HQ Berlin 2009), SPEECH MATTERS, Pavilion for Revolutionary Free Speech, Danish Pavilion, 54th Venice Biennale (2011), A Lighthouse for Lampedusa!, Museum Bozar, Brussels (since 2008, ongoing), War Traces, Pinakothek der Moderne, Munich (2017) 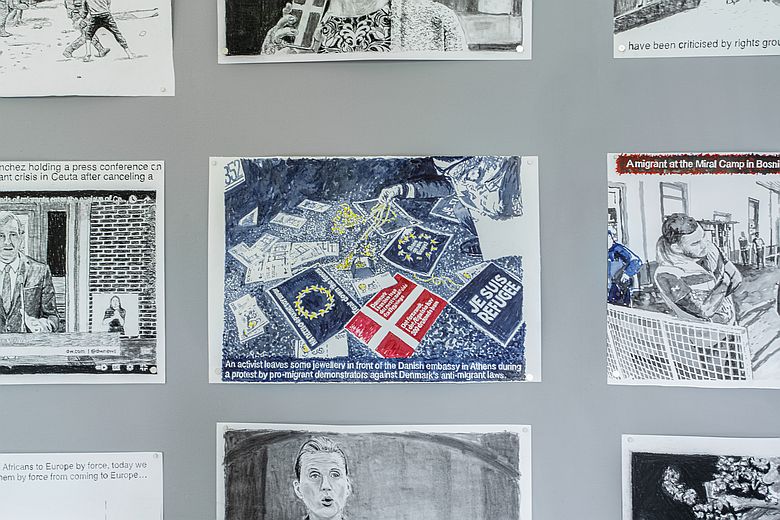