Speaking to Others: Who Speaks to Who 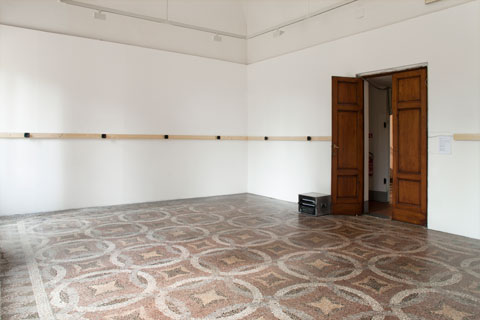 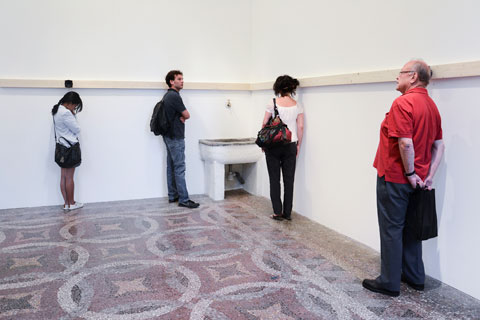 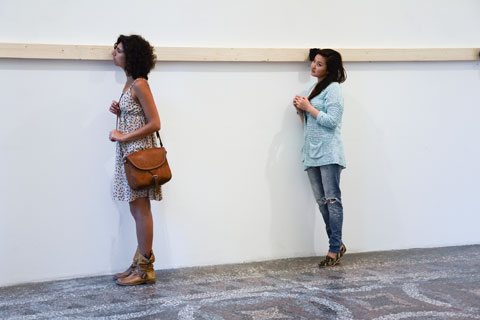 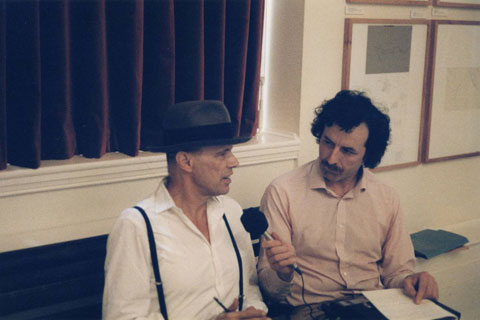 "...in the same way it is a necessity to come to a special utopian future image of society, but this utopia it means not an unreal moment … we have once more the duty to think about what we can do tomorrow, what we can do next week, what we can do in one month, and all these things … and therefore it is a kind of production for now and not for any future … let the people participate for instance in speaking about the problems … speaking with the people about these problems..." (Joseph Beuys, 1974)

The exhibition Speaking to Others: Who Speaks to Who presents a newly commissioned work by the British artist William Furlong created in response to the spaces of the Villa Romana in Florence.

Entering the Villa, the listener will hear the voices of artists firstly as an ambient series of overlapping discussions. Moving through each of the rooms, the dialogue develops, becoming more legible as the listener approaches the frieze of 28 loudspeakers. Mounted at ear-level it visually marks the architectural features of each room and aurally emerges as a continuous, non-linear spatial narrative which can be entered at any point.

As in previous pieces such as To Hear Yourself as Others Hear You (South London Gallery, 2003) and Intelligence (Tate Britain, 2000), Speaking to Others: Who Speaks to Who develops further the idea of a constructed conversation that is an arranged montage of original recordings made in different times and places (in studios, at international exhibitions, in galleries or museums) where Furlong met and talked individually to the artists. The piece dips in and out Audio Arts interviews where the listener is offered an audial glimpse of an issue or comment expressed by the artist. Here it is acknowledged that there is latitude in the nature of communication in a verbal exchange between two people.

The title of the work - Speaking to Others: Who Speaks to Who - refers directly to a subject who speaks, but also implies a subject who is listened to. This is a reciprocal act, a relational space created and defined by the human voice.  A creative endeavour that embraces spoken language as artistic material and as a modus operandi in itself.

The title of the work is also a key reference to the work of Joseph Beuys and his notion of social sculpture understood here as a performative space activated through speech and debate. Furlong met and recorded Beuys’s notorious lecture/performance at the Institute of Contemporary Arts in London in November 1974. He also interviewed him at the Victoria & Albert Museum in 1983 and at the Anthony d’Offay Gallery in October 1985 on the occasion of his installation Plight.

For the first time since the publication of Beuys’s interviews on Audio Arts, Furlong has re-visited the unpublished and unedited sections of the recording made at the ICA. In the installation for Villa Romana the words and utterances articulated by Beuys have merged into an intimate aural sculpture that poignantly recalls the political and aesthetic concerns shared by Furlong and Beuys in the mid 70s.

Speaking to Others: Who Speaks to Who embodies in this sense a double artistic act: a  sound installation that activates the listener and the space it inhabits (activated listenership), and as a whole, an archive of voices which is not mere audio documentation but creates a listening space which is, ultimately, for as well as about artistic experience.

Lucia Farinati has collaborated with William Furlong since 2005 as a contributor to Audio Arts magazine, an activity that has been followed by the curation of a series of projects exploring Audio Arts as an active archive. This talk will address the dual and dynamic relationship between Furlong’s artistic practice and the Audio Arts project. It will also provide a critical framework about the exhibition, looking both at the legacy of the work of Joseph Beuys as well as at the work of art historian and feminist Carla Lonzi.

Lucia Farinati (I/UK) is an independent curator and Director of Sound Threshold, a curatorial project that investigates the relationship between site and sound. She has collaborated with many sonic art projects and radio initiatives including Sound Proof 5, Errant Bodies, Resonance 104.4 FM, Radio Papesse and Radio Arte Mobile. She was the co-editor of Transmission, a book commissioned by Sound and Music for the 8th edition of the Cut & Splice Festival, London, 2010. She is currently working on the first collective reading and subsequent radio broadcast of Carla Lonzi’s book Autoritratto. Her collaboration with William Furlong started in 2005 as a contributor to Audio Arts magazine, an activity that has been followed by the curation of a series of projects exploring Audio Arts as an active archive, these include: Extraction/Construction/Abstraction, Sound Art Museum/Radio Arte Mobile, Rome 2006, Hearing Me Hearing You, Plymouth Arts Centre, Plymouth, 2006/7, Not Speaking the Language, Flat Time House, London, 2010. In 2006 she organized the Symposium Active Archive at the British School at Rome and subsequently was a contributor to the symposium Off the Record: The history and legacy of Audio Arts Magazine on contemporary art, Tate Britain, 13 October 2012.